WASHINGTON, D.C. — Americans’ views on their personal financial situation have been climbing since 2018 and are now at or near record highs in Gallup’s trends. Nearly six in 10 Americans (59%) now say they are better off financially than they were a year ago, up from 50% last year. 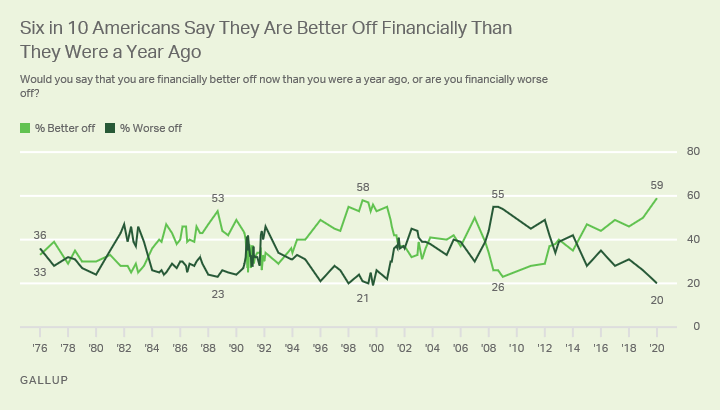 These data come from Gallup’s annual Mood of the Nation survey, conducted Jan. 2-15. The survey was completed after months of historically low levels of unemployment and as the Dow Jones Industrial Average neared the 30,000 mark for the first time.

The current 59% of Americans who say they are better off financially than they were a year ago is essentially tied for the all-time high of 58% in January 1999. That was recorded during the dot-com boom, with conditions similar to the current state of the economy — a stock market rocketing to then-record highs and unemployment at multidecade lows — though GDP growth was higher at that time.

From 1998 to 2000, at least half of Americans rated their financial situation better than that of a year ago. However, in most surveys from 2001 to 2018, the percentage saying their personal finances were better off than the previous year was under 50% — with a low of 23% in May 2009, during the Great Recession.

In addition to U.S. adults’ highly positive report on their current financial situation, Americans are also expressing peak optimism about their future personal financial situation. About three in four U.S. adults (74%) predict they will be better off financially a year from now, the highest in Gallup’s trend since 1977. 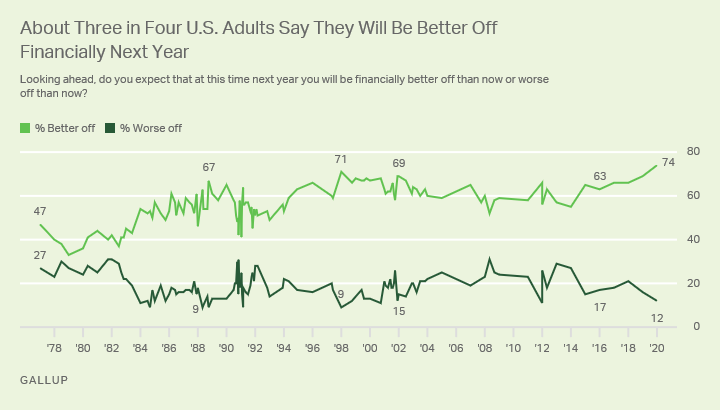 Since Gallup began asking this question in 1977, Americans have consistently been more optimistic than pessimistic about where their personal financial situation is headed, with more saying their finances will be better in a year than they are now. The previous record high, 71%, was seen in 1998 during the dot-com boom.

Given today’s highly politically polarized environment, it is perhaps not surprising that Republicans and Democrats see their personal finances differently. There is a 33-percentage-point gap between Republicans’ (76%) and Democrats’ (43%) reports of being financially better off today than they were a year ago.

There is also a partisan gap when it comes to optimism about one’s future finances, though it is smaller than the difference seen in attitudes toward current conditions. Among Republicans, 83% say their personal financial situation will be better in a year, compared with 60% of Democrats.

Independents fall in between on both measures, with 58% saying they are better off now than a year ago and 76% reporting they will be better off next year.

Americans’ levels of optimism about both their current financial situation and where it will be a year from now are at or near record highs. These views align with President Donald Trump’s contention that Americans are doing better under his presidency, and with his use of the economy and job growth as key selling points for his reelection. Republicans’ positive views on their finances are something of a given for a GOP president, at least during good economic times. The majority levels of optimism among political independents are more significant for Trump’s reelection prospects — and something Trump will want to maintain in 2020 to stay competitive.

Learn more about how the Gallup Poll Social Series works.