A version of this article first appeared in the “Reliable Sources” newsletter. You can sign up for free right here.


“We must not become a country at war with ourselves,” Joe Biden said in a Sunday statement that condemned the weekend’s shooting in Portland and accused President Trump of “recklessly encouraging” such violence.

For cooler heads to prevail, as they must, we all must have a sense of perspective. The tinderbox in Portland is an important story. So is the situation in Kenosha. But proportionality is key. Hyperpartisan websites and TV shows have a vested interest in blowing these stories out of proportion, which damages the public discourse and spreads unwarranted fear across the country. Here are a few examples of where proportionality is needed:

— The real problems in Portland are not reflective of the entire city, nor are they automatically applicable to other cities.

— Clashes between far-left anarchists and far-right agitators reveal practically nothing about the broader American electorate.

— The exaggerations about major metro hell-scapes, mostly emanating from the right, are being ridiculed by city-dwellers.

— Similarly, repetitive and sometimes outdated videos of riots are leaving people with false impressions about the extent of the unrest.

— The Trump years have caused tremendous strain in many communities, but Democrats and Republicans are still working together and helping each other in big ways and small. Where’s the video of that?

— Covid-19 continues to disrupt countless lives across the country, yet is too often treated like a second- or third-tier story.

— Millions of Americans who have to pay rent this week, and don’t have enough money, are largely suffering in silence. The struggles of the unemployed are being undercovered.

— For every Extremely Online person or every semi-professional activist, there are many more Americans who have tuned out politics altogether.

— Barack Obama’s tribute to Chadwick Boseman has far more Twitter engagement than any of President Trump’s inflammatory tweets over the weekend.

How algorithms are distorting American politics

The Atlantic’s Conor Friedersdorf made this point over the weekend: “Facebook and Twitter are becoming places where people are exposed to video after video of the most extreme folks on the other side behaving badly. This makes folks on both sides more personally radicalized, more fear driven, and less inclined to rein in their own fringes.”

Media researcher Dylan McLemore read this comment and added: “This is classic cultivation theory in mass communication — we see clips of violence, overestimate the prevalence of that violence, and it triggers psychological defense mechanisms to protect ourselves and our side.”

>> NYT tech columnist Kevin Roose hit on the algorithm’s role during Sunday’s “Reliable Sources.” He said journalists need to know what’s being shared on Facebook, where right-wing narratives are dominant: “It’s a completely parallel universe, in which Trump’s response to Covid-19 has been fast and effective; in which these riots in Portland and other cities are THE biggest news story in the world; in which these sort of culture war controversies become much bigger than anything that happened at the RNC or the DNC, frankly. I just think we have very little sense of what’s happening there…”

The press should lift up the voices of voters

I opened Sunday’s program by quoting from this WaPo story about unemployed Americans who feel left behind by Congress and the rest of the country. One of the people interviewed said, “I don’t even know if they realize in Washington what’s going on, because they don’t see it.”

My question: Do these Americans feel seen by the national news media? Or do they think we spend too much time reacting to whatever story Trump is tweeting about? I talked about the benefits of a “citizens agenda,” which would put the voices of voters front and center…

Canadian SPACs: Rising From The Ashes

Wed Sep 2 , 2020
Special Purpose Acquisition Corporations (SPACs) are all the rage. Once mired in obscurity, SPACs are reaching a fever pitch. The SPAC uptrend began in 2017, when 34 SPACs IPO’ed and raised $10 billion in funds. This was more than double the year prior. In 2019, there were 59 SPAC IPOs […] 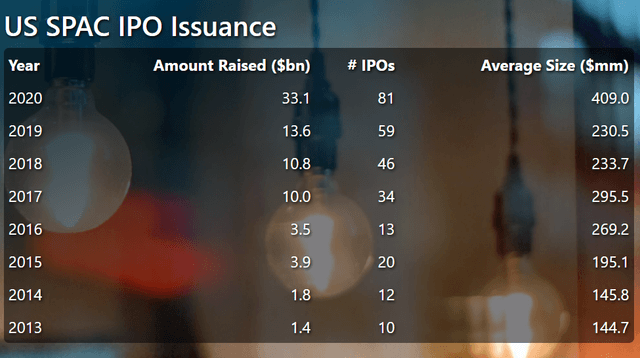