NEW YORK, Aug 18 (Reuters) – Has Wall Street missed the news that we are in a pandemic?

The U.S. economy remains battered by the coronavirus outbreak and Congress is deadlocked on another stimulus bill – yet the U.S. stock market just closed at a record high.

While it may seem that investors have failed to factor in any of the bad news weighing on most U.S. households, there are several key reasons why the stock market has recovered and could rally even higher.

“Main Street lives for today, whereas Wall Street focuses on tomorrow,” said Sam Stovall, chief investment strategist at CFRA. “There’s been a massive amount of monetary and fiscal stimulus… and there’s a rising confidence that pharmaceutical firms are getting closer to a vaccine.”

The Federal Reserve kick-started the rebound into risk assets by pledging $3 trillion in unprecedented monetary support, going so far as to buy corporate bonds. That led to many investors repeating the mantra: “Don’t fight the Fed” as they swooped in to follow the central bank’s lead.

Fiscal aid from U.S. lawmakers helped the Fed’s recovery efforts and further encouraged investors, as has the ability of many companies to beat expectations with their second-quarter earnings.

At the same time, bets that the Fed will keep interest rates at rock-bottom levels and stimulus flowing for the foreseeable future have pushed yields on some government bonds to record lows, driving money into equities.

“There’s a lot of money sloshing around in the system and a lot of it is finding a home in stocks,” said Jeff Buchbinder, equity strategist for LPL Financial.

While U.S. growth took its worst hit since the Great Depression in the second quarter from coronavirus-fueled lockdowns, some market participants have been factoring in a comparatively speedy recovery, as seen in a jump in Citigroup’s Economic Surprise Index .CESIUSD.

RALLY OR RISK AHEAD?

After the sharp rally, investors are considering looming risks such as the upcoming U.S. presidential election, with some concerned that a contested result will create volatility across markets.

Valuations remain a concern. The S&P 500 .SPX trades at 24.5 times forward earnings, a level last seen during the dot-com bubble two decades ago. Some worry there is still too much uncertainty over the trajectory of the pandemic and its impact on growth to justify those valuations.

“Much of the possible good news is already priced into markets, and valuations are starting to look stretched,” wrote Bob Doll, senior portfolio manager at Nuveen.

Meanwhile, investors crowding in a cluster of technology and internet stocks that have come to dominate the S&P 500 have heightened concerns that the index may be vulnerable to sharp reversals if holders decide to sell all at once.

The outsized rally has helped turn some previously bearish fund managers more bullish, with fund managers such as Guggenheim’s Scott Minerd predicting that stocks will continue to rise after the Nov. 3 presidential election, regardless of the winner.

DoubleLine’s Jeffrey Gundlach is among the few well-known managers who have remained bearish, telling Reuters in late July that the equity rally led by a handful of large tech firms is “classic bear market rally activity.”

More optimistic investors argue that tech-related stocks pull their share of the index’s weight. While technology and communications stocks make up about 40{5667a53774e7bc9e4190cccc01624aae270829869c681dac1da167613dca7d05} of the S&P 500’s market capitalization, they also account for a similar share of its earnings.

While the scorching rally in tech sector stocks seen in the second quarter has eased somewhat this quarter, the sector continues to outperform the broad market.

“The gap between the winners and losers is widening and the strong are getting stronger,” he said.

Fri Aug 21 , 2020
OTTAWA/TORONTO (Reuters) – The appointment of a journalist with little corporate experience to manage the finances of a G7 country would typically be seen as risky, but markets barely hiccupped on Tuesday after Chrystia Freeland was appointed Canada’s finance minister. Canadian Deputy Prime Minister Chrystia Freeland signs a book at […] 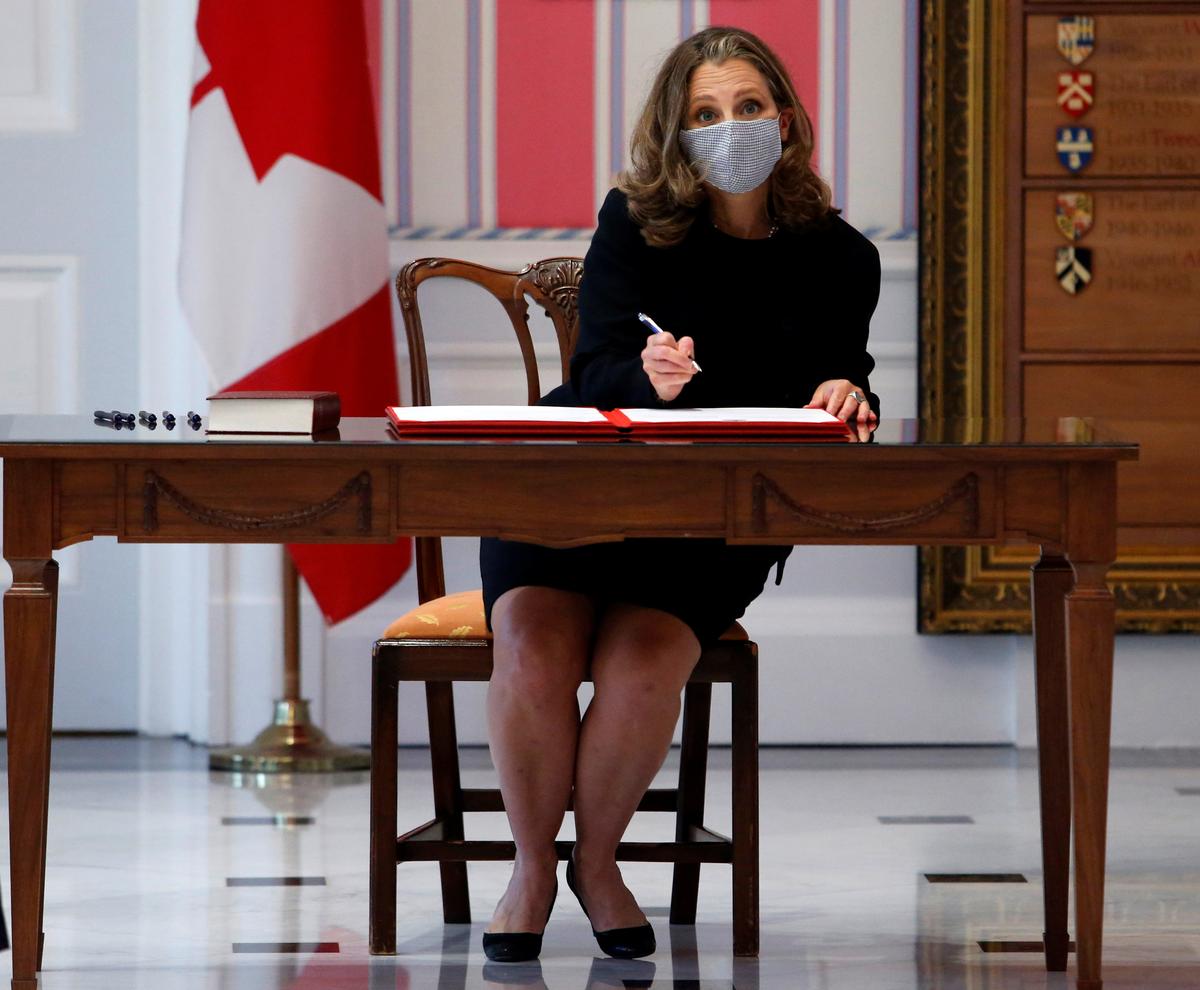