Mark Zuckerberg has championed Facebook’s commitment to free speech as a reason not to act on incendiary posts from President Donald Trump about the Black Lives Matter protests.

It’s a standard that activists and journalists in the Middle East wish extended to their accounts.

Dozens of Tunisian, Syrian and Palestinian activists and journalists, many of whom use the platform to document human rights abuses in the region, say their Facebook accounts have been deactivated over the last few months.

Civil liberties and human rights groups have argued this shows that Facebook appeals to free speech principles only when they are politically advantageous.

“My job is to document the kidnapping of children, the raids on the homes of innocent civilians and bombings carried out by the Syrian regime,” said Syrian journalist Mohammed Asakra, whose personal Facebook account was deleted in early May, along with dozens of others. “Facebook doesn’t care. It closes our accounts on the pretext of terrorism. We are against terrorism and violence.”

The takedowns come as Facebook CEO Mark Zuckerberg has resisted calls from his own employees to take action on posts from politicians, most notably one from Trump that implied violence could be used against looters in the wake of George Floyd’s death in police custody.

Zuckerberg has repeatedly defended the company’s policy of taking a hands-off approach with statements from politicians. He said in a post on May 29 that he disagreed with how the president spoke but that “accountability for those in positions of power can only happen when their speech is scrutinized out in the open.”

That scrutiny can only take place if Facebook doesn’t censor the voices of those who aren’t in positions of power, said David Kaye, the United Nations’ special rapporteur on freedom of opinion and expression.

“Zuckerberg’s position privileges the speaker as if free speech or even political speech is only speech that a politician makes,” he said. “Public debate means providing a space where everybody can speak. The whole focus on Trump has shown he doesn’t understand what freedom of expression really means.”

Over the last two months Facebook has deleted at least 35 accounts of Syrian journalists and activists, according to the Syrian Archive, a database of documentary evidence of human rights violations and other crimes committed by all sides of the conflict in Syria sourced mostly from social media.

The activists and journalists believe that Facebook is miscategorizing their accounts as having links to terrorism. Facebook said it was reviewing the accounts, but some may have legitimately violated the company’s policies prohibiting “praise, support or representation” of terrorist organizations.

“None of the journalists are linked to groups listed as terrorist organizations by the U.S. government,” said Hadi Al Khatib, the Berlin-based founder and director of the Syrian Archive, a nonprofit that collects documentary evidence of human rights violations in Syria.

Abdel Aziz Qetaz has been working as a photographer for Agence France-Presse for the last year documenting “violations against civilians in Syria” including airstrikes on civilian facilities such as hospitals and markets. He said that he exposes human rights violations carried out by both terrorist organizations including Al-Nusra and the Syrian government and its allies. Both his Facebook and Instagram accounts were disabled.

Some of those affected by Facebook’s decisions, including Asakra, have launched a campaign on Twitter, called #FBFightsSyrianRevolution, alleging that the company is trying to silence those who oppose Syrian President Bashar al-Assad.

Al Khatib believes the account takedowns may be a result of Facebook’s increased use of artifical intelligence and machine learning to analyze content during the COVID-19 lockdown. Since the COVID-19 lockdown, Facebook has sent home many of its contracted content reviewers and relied on automated tools for content moderation decisions. This means it has made more mistakes and is slower to respond than usual, the company has acknowledged.

“Facebook and other social media platforms are very useful for raising awareness about many different injustice issues, especially in oppressed countries under authoritarian regimes where the situation doesn’t allow for independent media and freedom of speech,” Al Khadib said. “It definitely looks like they are more cautious about the speech of political leaders than the human rights activists or journalists.”

Facebook also deactivated at least 52 accounts belonging to Palestinian journalists and activists in a single day in early May, according to a report by London-based online news outlet Middle East Eye.

The mass removal of accounts is the latest in a series of incidents over several years involving Palestinian accounts being removed from the platform without explanation. In some cases, Facebook’s automated translation tools were responsible for mistakes, including when the company translated a post by a Palestinian man saying “good morning” into “attack them,” leading to the man’s arrest by Israeli police in 2017.

Of the Syrian and Palestinian accounts deleted, a Facebook spokeswoman said that staff with regional and language expertise were reviewing what happened and the messaging that was sent to people when they were informed that their account had been disabled.

More than 60 accounts belonging to Tunisian journalists, activists and members of the public were deleted at the end of May with no explanation. Among them were bloggers who played a prominent role during the Arab Spring in Tunisia, including Haythem El Mekki and Bullet Skan. The list also included nonpolitical individuals including a DJ and an artist.

Facebook notified users with a message: “We’ve determined that you are not eligible to use Facebook. This decision is final. Unfortunately, for safety and security reasons, we can’t give you any additional information as to why your account was disabled.”

Facebook typically issues this message if an account is considered to have ties to a foreign terrorist organization as determined by the State Department or if it’s involved in “co-ordinated inauthentic behavior,” a term the company uses for organized groups trying to spread misinformation and exert political influence.

The company’s head of cybersecurity policy Nathaniel Gleicher said that many of the 60 Tunisian accounts were taken down for their role in a campaign of “coordinated inauthentic behavior” involving a network of hundreds of Tunisian accounts and pages targeting French-speaking countries in Sub-Saharan Africa with political messages.

Although the network was reviewed by Facebook three times before the accounts were taken down, a “technical error” meant that about 20 accounts, including those of El Mekki and Skan, were deleted by mistake, he said. Facebook restored those accounts “in a matter of hours.”

“We know we are not perfect and we know we are going to make mistakes,” Gleicher said. “Having a system to remediate is absolutely critical.”

Of the accounts that are still offline, at least three people — DJ Hamdi Ryder, event promoter Guediri Mohamed and artist Jawher Soudani — said that they didn’t understand how they were linked to the influence campaign.

“My Instagram account was full of my pictures and some nature shots. My other account — for an artistic bar — only posts details about events,” Mohamed said.

Gleicher maintained that accounts that remained down had been found to be part of an influence operation.

Human rights experts fear that Facebook isn’t doing enough to protect the speech of those who aren’t in power.

“I am concerned about the erasure of movement voices,” said Jillian York, director of international freedom of expression at the digital rights nonprofit Electronic Frontier Foundation. “The imbalance of power is already skewed toward politicians. Whether or not politicians stay up matters less as they can always speak on TV. Activists only have these platforms to get heard. They don’t have the New York Times op-ed pages.”

Accounts are often suspended or deactivated with no warning or reason, said Rima Sghaier, a Tunisian researcher at the intersection of technology and human rights. This is in violation of the Santa Clara Principles on transparency and accountability in content moderation, which civil society groups want social media companies to uphold.

“I dream of a world where political leaders don’t get a pass just because of their position and the power they have,” Sghaier said. “Platforms need to further develop their policies to protect activists and free speech against those who have power.”

Facebook’s focus on keeping Trump’s speech on the platform takes the focus away from the content moderation decisions taking place outside of the United States, where the stakes can be much higher. In some cases, Facebook’s lack of action over misinformation that incites violence has fueled real-world attacks while in other cases removal of accounts erases evidence of human rights abuses.

“Outside of the United States, Facebook may be *the* platform for advocacy and debate,” Kaye said in a text message. “It gives Facebook enormous power over the public space in those places, and with that comes a kind of responsibility that may vary from the kind at issue in the U.S.”

Tue Jun 16 , 2020
Tens of thousands of people have poured onto England’s high streets as non-essential shops were allowed to reopen for the first time since lockdown began. While many of those who stepped out despite coronavirus fears to engage in some long-awaited retail therapy cited concerns about looming job losses in the […] 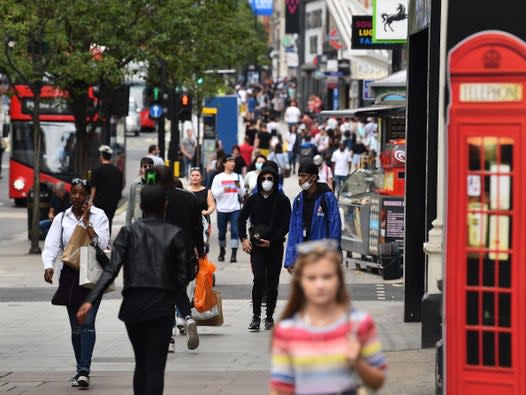