Two years after she stepped into the role of Community Preservation and Economic Development Coordinator, Katie Mahoney said she has made the decision to resign from the position to work for the Billerica Public Schools.

Mahoney, a former Billerica School Committee member who announced she would not run for reelection this past spring said she is leaving the economic development office on Wednesday, Sept. 9.

On Monday, Sept. 14, she will start her new position as the curriculum coordinator clerk at Billerica Memorial High School.

Mahoney said she came to the conclusion she wanted to resign after the Monday, Aug. 17, meeting of the Board of Selectmen.

She said it was during the town manager’s review that Chairman Mike Rosa Vice Chairman John Burrows and Selectmen Dan Burns expressed their disappointment with the economic development department and the push to disband or reorganize its staff in the near future.

“Obviously they weren’t happy with economic development,” said Mahoney during a Thursday, Sept. 3, interview. “I think my resignation letter speaks for itself. I am excited to start a new chapter. I got lucky with the opportunity I had here.”

She also said she felt like her interactions with Burrows in the development office were not up to the professional standard she expected from a member of the Board of Selectmen.

Mahoney said she felt she had been spoken to with disrespect on a day where Burrows stopped by the office to look at the plans for the proposed 279 Boston Road project.

She said after saying something at her desk, which is away from the office’s main desk Burrows allegedly asked her to get up and say what she was talking about to his face.

Burrows said in an interview he, “has nothing against her,” and when he came in he was having a conversion with Community Development Director Rob Anderson when he heard Mahoney speak.

“[Anderson said] I don’t appreciate you calling out the economic development department,” said Burrows. “I said I am going to keep calling it out. I am not going to sugarcoat it. Then Katie started talking loudly, she wasn’t involved in the conversation, it had nothing to do with her.”

In Mahoney’s letter which is dated Wednesday, Aug. 26, and addressed to Community Preservation Committee Chairman Rich Scanlon, she wrote, “Leaving this position was not an easy decision.”

“It is unfortunate that my time here has to be cut short,” said added. “I have felt both personally and professionally threatened by three members of the Board of Selectmen who have differing political opinions than mine. This left me no choice but to pursue other career options. My job, my career, and my integrity have been threatened on multiple occasions and in all forms of media: newspaper articles; emails; social media; and even live televised Board of Selectmen meetings. For this reason, I felt forced to look for another job. The decision to leave has been very difficult, but I must protect both myself and my family.”

A full copy of the letter can be found on our website www.billerica.wickedlocal.com.

Burns responded to the letter on Sept. 3, by expressing his frustration with the work of the development department as a whole, but stressed what was said during the meeting wasn’t directed at Mahoney in particular.

“I don’t understand the rationale in her letter,” said Burns. “Nobody has targeted her or done anything against her. I find her accusation a bit offensive.”

Anderson said he is disappointed to see Mahoney leave the position and in his eyes, she has been a great asset to the department and its mission to help Billerica evolve as a town.

“Frankly, her stepping away is a detriment to the office,” said Anderson. “I think she had a great pulse on the community.”

Mahoney added she felt, “the writing was on the wall,” as early as the beginning of August. She said she was made aware of an email from Burns to Town Manager John Curran where he questioned a post Mahoney had made to her personal Facebook page where she shared plans of a development project which she expressed support for.

Burns said he did send the email out of concern of the information Mahoney was sharing with the public, but “there was nothing in it other than that.”

Curran responded to Burns in an email obtained by the Minuteman, “Katie Mahoney was not at work when she did those posts. I cannot regulate what she does on her own time.”

Tiz the Law should win the Kentucky Derby easily

Sat Sep 5 , 2020
The only certainty for the Kentucky Derby is that Tiz the Law is going to be the overwhelming favorite when the long-delayed race finally happens Saturday. If all goes right, he’ll win for fun. Thing is, 15 other horses are arriving with connections that have spent weeks strategizing how to […] 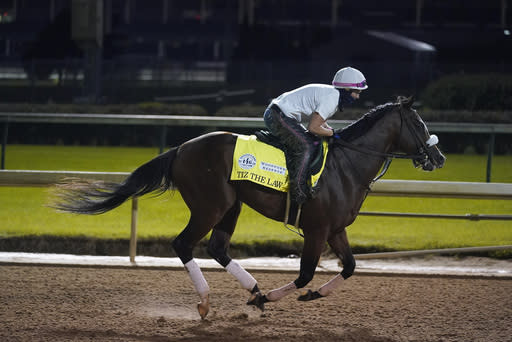