That’s not how the President describes it as he prepares to accept his party’s nomination once again at this week’s upcoming Republican National Convention. He instead emphasizes the early shape of recovery, calling it a “Super V” pointing back up toward prosperity.

But the “V” points up from the bottom of an economic crater; its direction from here remains uncertain. At minimum, that complicates Trump’s task of digging out of his deep political hole against Democratic nominee Joe Biden this fall.

The stark polarization of 21st century politics makes economic conditions just one factor in shaping election outcomes. Cultural issues may matter more. And in 2020, the unique nature of Trump’s presidency and unique circumstances of his economic woes make their effects all the more difficult to fathom.

Economic collapse did not cause Trump’s political problems. Disaffection with his divisive leadership and erratic behavior has made him the first president never to reach 50{5667a53774e7bc9e4190cccc01624aae270829869c681dac1da167613dca7d05} approval in his term. Solid growth, low unemployment and strong financial markets didn’t keep his party from losing its House majority in 2018, or keep Trump from falling behind Biden early this year.

Nor did Trump’s policies cause the economic collapse. The coronavirus pandemic did, here and around the world as governments shuttered economic activity to slow the spread of infection.

In part, that split verdict reflects the lingering effects of buoyant economic performance during the first three years on his watch. It even tracks on-the-ground results this year.

The US has done far worse than other rich countries in controlling coronavirus infections and deaths. But the US has also suffered a smaller output drop so far than counterparts such as Spain, France, Italy, Germany and Canada.

Those divergent outcomes are not coincidental. More limited US lockdowns, followed by hasty reopenings that Trump encouraged, tempered the economic downturn while simultaneously seeding viral spread. More generous emergency relief enacted by Congress and the administration cushioned the blow of layoffs enough that personal income actually rose this spring despite the downturn.

Yet that short-term economic benefit is fading, and the bill for Trump’s approach is now coming due.

The coronavirus resurgence this summer has caused some state and local officials to dial back reopening, dented consumer and business confidence and slowed the recovery. Expected increases this fall, as schools, colleges and businesses push ahead, threaten to compound the impact.

At the same time, interest by the White House and the Senate’s Republican majority in further fiscal relief has waned. A $3 trillion bill passed by the Democratic-controlled House — to finance assistance for revenue-starved state and local governments, revival of the lapsed $600-per-week federal unemployment benefit, and another round of $1,200 direct payments for most Americans — languishes with no Senate action yet.

The robust job growth that reopening triggered, with 8.5 million added in May and June, slowed in July. Last week, the number of Americans filing new unemployment claims rose back above a million. Five months into the downturn, it remains higher than in any single week of the Great Recession. State and local governments warn of impending layoffs.

A short-term crisis is turning into a long-term mess

Trump will have at least one number to brag about this fall, with or without additional relief legislation. The sudden spring shutdown sent second quarter growth plummeting at an annualized rate of 32.9{5667a53774e7bc9e4190cccc01624aae270829869c681dac1da167613dca7d05}. The scale of that drop assures that reopening, just as rapidly, will produce a gigantic-looking third quarter increase — even though the economy remains damaged and diminished.

The Conference Board forecasts that third quarter growth number, which the government will announce five days before the election, at 26{5667a53774e7bc9e4190cccc01624aae270829869c681dac1da167613dca7d05}. “It’s going to look like the best quarter ever,” notes University of Michigan economist Justin Wolfers.

Other wealthy countries have seen smaller rises despite more severe lockdowns, because of labor market policies that constrain layoffs. Even if Trump and Congress lavish additional money on individuals, businesses and governments, Zandi expects the economy to end the year with 10 million fewer jobs than when it started.

Mon Aug 24 , 2020
Gold reversed from the highest level since August 19, losing more than $30. XAU/USD continues to consolidate around $1930/40 area. Gold is falling modestly on Monday after being unable to hold onto gains and following recovery of the US dollar during the American session. The ounce peaked at $1,962, but […] 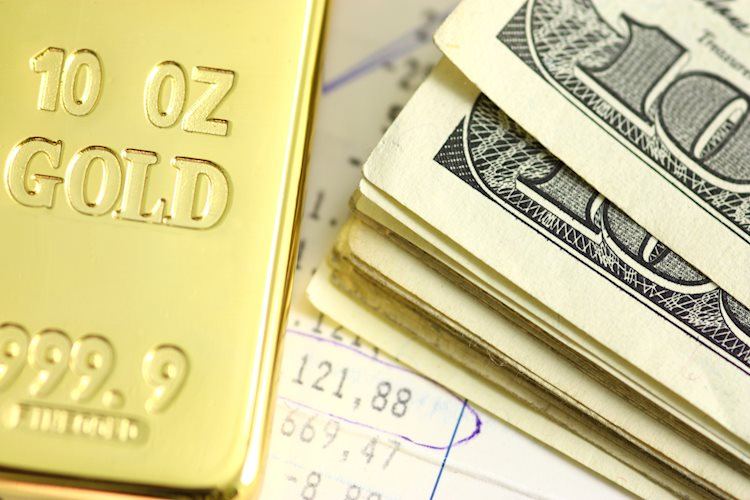