The midsummer standoff in Washington over the next round of coronavirus stimulus takes place in the shadow of two grim realities: a rising tide of coronavirus infections and deaths and the news that America suffered the worst quarter in its economic history this spring.

The protracted negotiations over this latest stimulus came more than two months after the House passed a plan to help America’s workers and state and local governments. The delay and the Trump administration’s negotiating positions reveal yet again that President Donald Trump’s economic agenda is corporatist, not populist, and that his governing agenda guts America’s global competitiveness, harming our ability to compete against countries like China.

Those on both sides of the aisle opposed to Trump’s mismanagement of the twin crises of the pandemic and economic meltdown need to do more than just criticize his mistakes.

Those on both sides of the aisle opposed to Trump’s agenda and his mismanagement of the twin crises of the pandemic and the economic meltdown need to do more than just criticize his mistakes — they need to present an economic policy vision that links a domestic renewal agenda with a fresh approach to global economic engagement — one that does not repeat the naive mistakes of the past that opened the door to China’s rise and that learns from the mistakes of the Trump years.

Trump’s re-election playbook is centered on a simple narrative: Foreigners have been taking advantage of America for decades. Trump touts “better” trade deals, and he links his domestic policy to an unpredictable foreign policy that amounts to treating America like his gated Mar-a-Lago, walling the country off from the world’s problems while bullying others with bluster and unpredictable moves.

The coronavirus crisis shows that security threats and economic challenges know no national borders and respect no walls. Blurred lines between domestic and foreign policy complicate Trump’s political strategy. He will try to claim credit whenever he can, such as pointing to small numbers of recovered jobs and stock market rallies as evidence that “the crisis is being handled” even while 2 in 5 mothers are struggling to put food on the table.

Get the think newsletter.

Today’s economic reality is the logical outcome of Trumpian corporatist policy: double-digit unemployment, an economy shrinking at record pace and a stock market rallying to new highs. His signature achievement, a 2017 corporate tax cut, actually raised many families’ taxes, racked up massive debts and left the nation financially ill-prepared for the coronavirus crisis.

Meanwhile, far from being tough on China, Trump has damaged America’s farmers and exporters with erratic tariffs, waffled on his campaign promise to designate China as a currency manipulator and been easily manipulated by occasional promises from Chinese leaders to buy goods or opportunities to juice the stock market with rumors of a new trade deal.

What does an alternative economic nationalism agenda look like?

First, massive public investments in infrastructure, education, research and technology, particularly biotech. Putting Americans back to work rebuilding the systems that led to our dominance of the 20th century — quality schools, roads, communication systems and new biotechnology — is politically popular and smart policy.

Solving the COVID-19 pandemic is our top health and economic goal and a reminder that biotechnology is critically important to our national security.

Solving the COVID-19 pandemic is our top health and economic goal and a reminder that biotechnology is critically important to our national security. Some may say the massive debt Trump saddled us with means we cannot afford to fix our problems. To the contrary, more public investment is critical to restarting the economy and making the investments to make America more competitive in the world. The key is targeting our investments to maximize return by investing in new technology to unleash new enterprises in green energy, futuristic transportation and the biomedical advances that will defeat COVID-19 and improve our health.

Second, a new economic nationalism uses tax and regulatory policies to prioritize American families and workers above corporate profits. CARES Act programs produced billions in profits for banks, made federal grants available to so-called small businesses like the Los Angeles Lakers and propped up corporate debt for companies that report billions in record profits, like Apple and United Health Care. Meanwhile, American families were given too little in direct assistance with false hope of money trickling down. This aggressive destruction of the social safety net at home makes America less competitive overseas.

During the height of the coronavirus recession, Trump’s Consumer Financial Protection Bureau eliminated a rule requiring that payday loans be made only to those who could repay them, while people were still waiting weeks and months to receive their coronavirus stimulus payments. We should have learned our lesson from the financial crisis: that loans that cannot be paid back should not be made. And there is no good reason America’s payment system is decades behind the rest of the world, causing billions in overdrafts, late fees and costs to those living paycheck to paycheck.

Last, a new economic nationalism would integrate foreign policy decisions with a sharper focus on the effect that relations with other countries has on prioritizing export-driven job growth in America. In responding to the pandemic, the United States should seek to avoid a zero-sum competition for medical supplies, such as personal protective equipment, and work with key democratic partners in Europe and Asia in developing and deploying a vaccine efficiently once it is ready. In addition, we need a steadier commander-in-chief than Trump, whose erratic moves on complicated issues like Iran and North Korea could easily get America into another costly conflict overseas, like the 2003 Iraq War.

The debate on the next stimulus package will not be able to address such a far-reaching agenda as this one — but leaders in Congress can use the debate to set the framework for the long-term investments America needs to recover from the crisis and to revive America’s position in the world.

Brian Katulis is a senior fellow on the national security and international policy team at the Center for American Progress Action Fund.

Aaron Klein is a fellow in Economic Studies at the Brookings Institution and served as deputy assistant secretary for economic policy in the U.S. Treasury Department from 2009 to 2012.

No matter who wins in November, stocks are likely to beat bonds, this analysis finds

Mon Aug 24 , 2020
The Wall Street bull statue in the Financial District in New York City. Drew Angerer/Getty Images Stocks are likely to beat bonds over the next few years, and, if history is any guide, are likely to do better in the year after the upcoming U.S. presidential election than in 2020, […] 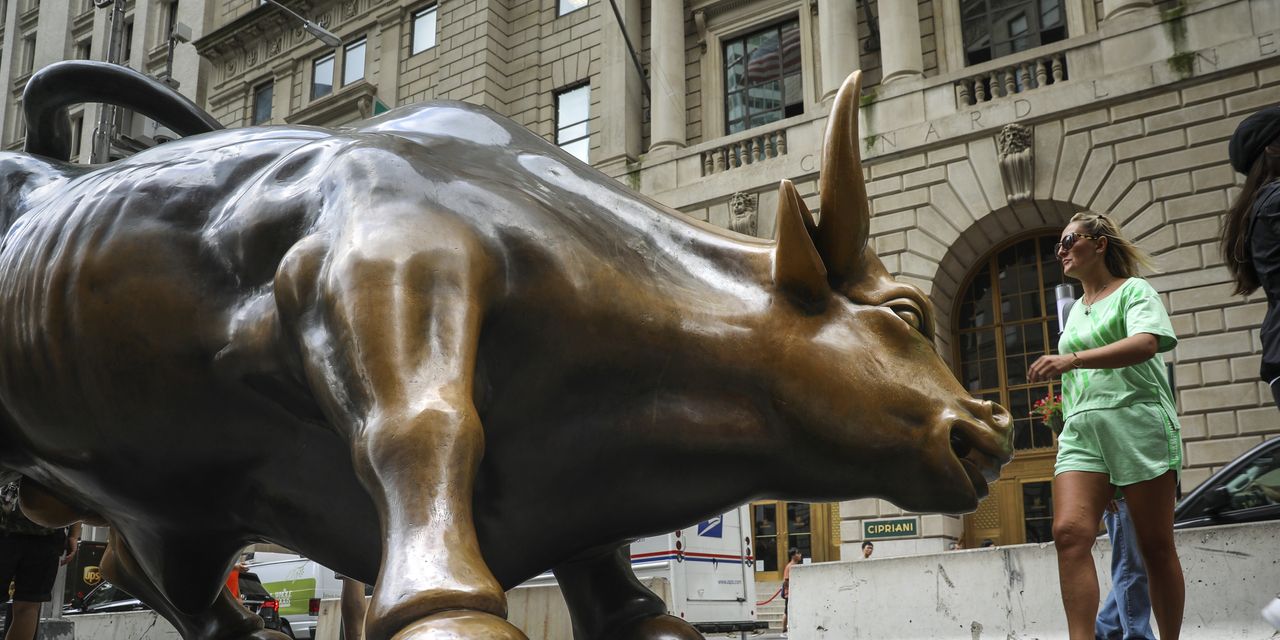