The character-reference letter to the federal judge in North Carolina was filled with praise and adulation.

The letter painted a flattering picture of a billionaire businessman named Greg Lindberg.

It also mentioned Macon — and more than in passing.

In the letter, Lindberg, who was recently convicted of attempting to bribe North Carolina’s insurance commissioner using hundreds of thousands of dollars in campaign contributions and was sentenced to more than seven years in prison, was described as “generous, magnanimous, upstanding, fair-minded, and incredibly brilliant.”

Lindberg rose to prominence as the founder of Eli Global, now Global Growth, a private-equity firm that at one time owned more than 100 companies, spanned multiple industries and continents and employed thousands. In 2017, a spokesman said Lindberg was worth $1.7 billion, according to a story by the Raleigh News & Observer.

He became one of North Carolina’s largest political donors and was convicted of attempting to bribe Insurance Commissioner Mike Causey with $2 million in campaign contributions to reassign a senior regulator who oversaw one of Lindberg’s companies. He ultimately funneled $250,000 through the state Republican Party, the Charlotte Observer reported.

“We have a serious breach of the law. We’ve got to deter people who think it’s a good idea to bribe officials in North Carolina,” U.S. District Judge Max Cogburn said when he sentenced Lindberg earlier this month.

The character reference noted that Lindberg was planning to build an “amazing,” sprawling, 2.1-million-square-foot protective-mask-making plant in Macon.

“He always does what he says he’s going to do,” a private-banking associate of Lindberg’s wrote in the letter to Cogburn. “He is a breath of fresh air in a financial industry, in a financial world that is overly-abundant with users and abusers. Mr. Lindberg’s words, statements and handshake are as solid as steel or in his case, gold — he has the Midas touch for sure.”

The next paragraph, as an example of the 50-year-old Lindberg’s financial acumen, told how the proposed Macon face-covering facility “will most assuredly become the USA’s, and within a few years the world’s, largest mask manufacturer with over 1 billion N95 masks made per year (by EOY 2021),” and that it “will employ minority ex-cons from the local community.”

“This new Lindberg business,” the letter went on, “… will provide countless jobs to the local Macon, GA community and to persons in great need of such jobs. We are excited, encouraged and highly confident that these jobs will help to drastically reduce the recidivism rate of these minority ex-cons. This new company is a perfect example of the highly-intelligent, well-meaning, generous man, that Mr. Lindberg is, and I am honored to call him my friend.”

No word on project status

As laudatory and flattering as the letter may sound, that is often how such letters are fashioned with the aim to elicit leniency, to show that while people may be convicted of crimes they have human sides, that they can be generous and compassionate good citizens. The accounts from reference letters can be considered and weighed on their merits by judges at sentencing.

Whether the letter on behalf of Lindberg and other missives like it paid dividends for him can’t be known. (Prosecutors had recommended a sentence of 14 years and he received just over half that.)

What also remains unknown is whether a mask-manufacturing plant is actually in the works for Macon, and, if there is, how many people might it employ.

Answers about the proposed factory’s status are hard to come by. Officials familiar with the project have been tight-lipped.

Last week, the man who wrote the reference letter for Lindberg, Ronny Vogel, the CFO of Seattle-based Assets America, cited a nondisclosure agreement and declined to speak on the record to The Telegraph about the prospects of such a venture.

On Monday, a representative of the mask company also declined to comment.

Stephen Adams, the executive director of the Macon-Bibb County Industrial Authority, said the authority regularly interacts with people and companies eyeing Macon as a place to do business.

But overtures from prospective entities are typically kept confidential until deals are closed.

“We do have a very thorough due diligence process that we enter into with those companies that are interested,” Adams said, “in an effort to ensure that any companies that do end up locating here are a good fit for our community and our region.”

Joe Kovac Jr. covers crime and courts for The Telegraph with an eye for human-interest stories. Joe is a Warner Robins native and graduate of Warner Robins High. He joined the Telegraph in 1991 after graduating from the University of Georgia. As a Pulliam Fellowship recipient in 1991, Joe worked for the Indianapolis News. His stories have appeared in the Washington Post, the Seattle Times and Atlanta Magazine. He has been a Livingston Award finalist and won numerous Georgia Press Association and Georgia Associated Press awards.
Support my work with a digital subscription

Fri Aug 28 , 2020
US Dollar The US dollar has recently lost ground against the Swiss franc. The one-year chart below shows that the US dollar was trading at about par with the Swiss franc when it weakened coming into the new year. The COVID-19 correction in March left its mark, but the dollar […] 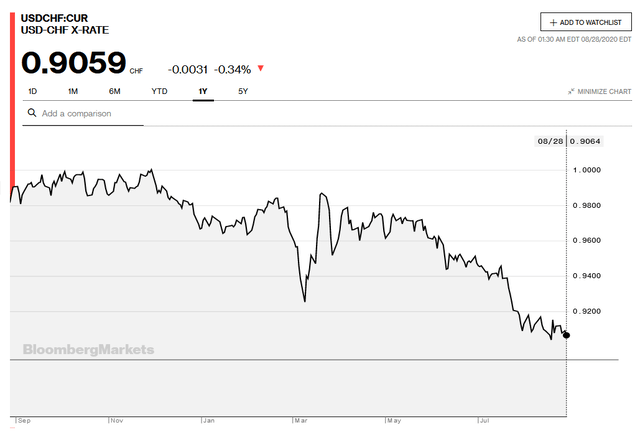