LONDON — Blindsided by COVID-19 — which closed their stores, shut their factories and forced them to stay at home — British designers took a great leap into the unknown, piecing together collections, films, exhibitions and creative projects for London’s first, all-digital fashion week instead of showing their wares on the runway, a familiar — if flawed — format.

In late March, as London locked down, the British Fashion Council snapped into action and started organizing the three-day event in a bid to give designers — who had been cheated of their fashion week, showroom appointments and spring 2020 retail sales as a result of the coronavirus — the chance to strut their creative stuff.

Even if those designers couldn’t show new clothes, the BFC wanted to give them the opportunity to engage with end consumers whom they need right now to shop. With all stores in England allowed to reopen as of Monday, June 15, the timing could not have been better.

The showcase, which wrapped on Sunday night, was a mixed success: Anyone looking for newness — and clothes — would have been disappointed because there wasn’t much of either.

There were some fun films, though, and lots of creative projects that gave viewers insight into the designers’ worlds. Some conversations and Q&A’s were interesting, while others ran too long and turned dull pretty quickly.

In putting together the new London Fashion Week site, which is now a permanent fixture meant to house designers’ digital assets, the BFC looked to Netflix and wanted to allow everyone to watch what they wanted, when they wanted.

While the events ran smoothly on the site, it is clear there is still much to be done in terms of improving the user experience; curating the multitude of content available on the platform, and building a sizeable, engaged audience that’s willing to tune in to three days of virtual events.

While the runway format may be under fire right now — it’s expensive, wasteful, damaging to the planet and to London designers’ limited resources — there is no doubt it remains an exciting, engaging way to show collections.

Like a West End stage play or a concert at the Roundhouse or the O2 arena in London, a fashion show is live entertainment with scope for surprise and spontaneity. Neither pre-recorded events nor livestreaming can match it.

Bruce Pask, men’s wear director at Bergdorf Goodman and Neiman Marcus and a longtime advocate of British fashion (and one of very few U.S. retailers to attend London Fashion Week season after season) argued that a digital showcase is no substitute for “in-person shows, conversations, introductions and all other occasions and places where inspiration and discoveries can arise, often unexpectedly, while attending each city’s fashion week.”

Derek Blasberg, head of fashion and beauty at YouTube, which partnered with the BFC for the three-day London event, echoed Pask during one of the many scheduled talks that took place.

“Fashion week is the time when the industry gets together and plans their future. Of course, right now we’re all doing that over video conferences, but I think photographers, stylists, editors, makeup artists, models, hair stylists, and the rest of the fashion world looks forward to the day when we can sit in the same room and talk shop again,” Blasberg said.

Indeed, a lot of the online conversations that took place over the course of the event felt flat or repetitive — they ranged from designer diaries to chats around collection inspirations to designers’ conversations with collaborators and mentors. The online films, even when they were at their most charming, didn’t evoke the sort of emotion that a physical catwalk show usually does.

The viewer numbers laid this bare: Some online panels on YouTube got as little as 20 or 30 live viewers and Instagram Live presentations clocked no more than 200, maximum 300 views. Charles Jeffrey Loverboy’s lively online fundraiser for U.K. Black Pride, where he “passed on the mic” to creatives of color on Saturday night, was filled with some terrific live performances.

As of Sunday, it was struggling to notch 130 views on YouTube.

The consensus here is that the physical iteration of London Fashion Week is bound to make a return as early as September, depending on quarantine rules, social distancing measures and whether COVID-19 spikes again.

The BFC is already preparing for the return of the physical showcase. Last month it drafted a manifesto with the Council of Fashion Designers of America that looks ahead to a time, post-crisis, when in-person events can resume. The reset manifesto recommends that brands attempt to show during the regular fashion calendar and in one of the global fashion capitals.

While this first digital showcase may have been imperfect, it kept creative wheels spinning, gave designers a platform to shine, and forced them to experiment and to keep an open mind.

The event also gave a voice to a new generation that’s eager to address the industry’s knotty issues and rebuild the fashion system post-COVID-19. To wit, during his Instagram Live conversation on Sunday, the designer Matthew Miller said fashion needs to think beyond the catwalk, and align itself with different industries.

“We are so chained to the catwalk right now, but we need to be looking beyond clothes to design” in its greater sense, he said, adding that he’d be interested in creating more digital fashion with PlayStation 5, or working with the music industry, Netflix, Amazon Prime or Marvel Entertainment.

“It’s time for multimedia to start working together,” said Miller.

He wasn’t the only one looking to other media: It’s clear that many young brands are taking control of their narratives and business models rather than trying to keep up with the relentless pace of the traditional system.

Some, like Bianca Saunders or the LVMH Prize finalist Priya Ahluwalia, showcased personal projects. Saunders made a ‘zine while Ahluwalia staged a virtual photo exhibition. Both moves embraced the more current, forward-thinking attitude that Miller was talking about.

Kaushik Velendra, who debuted his label in January and began making a name for himself with a glamorous take on men’s tailoring using sculptural, defined shoulders, decided to keep things simple.

Instead of trying to come up with a full collection, he created one-size-fits-all shoulder molds and debuted them via a film on the LFW site. The molds can be added to any outfit, and come in black and white. They can be made to order or customized.

“Doing the collection I had [originally] envisaged was not an option. It got me thinking how I could design a piece that would work for now — potentially with little or no clothing underneath or when more dressed up. I was thinking about how one size could fit all,” said the designer.

Palmer Harding designers Matthew Harding and Levi Palmer chose to participate in the showcase via the now-familiar Zoom call, chatting with Tank magazine’s Caroline Issa about the story of the brand, their personal relationship — a one-night stand that turned into marriage apparently — and their signature shirts, instead of presenting any new product.

The duo also highlights a series of new commitments the brand is making to replacing the majority of their fabrics with natural or organic ones as of spring 2021 and incorporating a charitable element to their work through a partnership with Chayn, a charity addressing gender-based violence. They will also be shifting collection deliveries to avoid early markdowns.

During the three days, designers also banded together to address anti-racism and fashion’s diversity challenges. The University of Westminster’s Class of 2020 kicked off its graduation showcase with a demand for better representation at fashion schools, while Saunders presented her ‘zine with the photographer Joshua Woods in the context of a conversation about Black creatives and diversity in fashion.

Others chose to prioritize their brand message — and their end consumer — with smaller, more focused collections: Daniel W. Fletcher presented a fall 2020 see-now-buy-now range of just 12 looks, which he said is far more “aligned with the size of the brand;” Preen by Thornton Bregazzi created a seasonless capsule of signature dresses, while Marques’ Almeida debuted a new subsidiary line featuring one-off pieces made out of deadstock fabric.

Fashion’s ongoing diversity issues were also addressed as part of the “How to Become” conversation series between Wonderland magazine’s editor in chief Toni-Blaze Ibekwe and stylist Solange Franklin Reed.

“We’re going to see accountability and coalition — that’s the future. We started with representation and we have moved to inclusion: There’s a huge difference in power structure and the people who now have a seat at the table are ready to make sure we don’t get lost. It’s a time to rebuild and when you have systems where the typically privileged folks are no longer benefiting, it leaves room for change,” said Franklin Reed, who has styled the likes of Serena Williams and Tracee Ellis Ross.

Jeffrey released a capsule collection of knitwear, jersey, T-shirts, hoodies and accessories with splashes of color, and lots of placement prints, including sensual mouths, images of the designer with long lashes and kiss curls.

Restraint, upcycling and sustainable practices played a role in almost every collection that was presented during the event: Christopher Raeburn returned to his roots of repurposing military garments. Robyn Lynch worked with Rapha to source deadstock fabric and create a sporty capsule featuring pieces that melded technical fabrics with Aran knits, cut up and sewn back together.

The designers’ output this season also signals a shift to new creative and selling models based around one-off pieces or limited-run capsules that retailers will need to embrace.

During the three days, other designers switched up their presentations with tech, VR and special effects.

The Shanghai-based brand 8on8 debuted an immersive video to showcase hats from its upcoming spring 2021 collection. Anyone in possession of a virtual reality headset will be able to enjoy a panoramic view of the Shanghai skyline and the brand’s embellished newsboy hats. Gong Li, founder of the brand, has had to move his show date to August since most of his fabrics are stuck in Italy.

Stephen Jones, meanwhile, showed a preview of what to expect from his signature millinery for spring 2021. He did a video in collaboration with Noonoouri to show the creative process of creating a hat. The spring 2021 collection, which will be showcased in full in September, is called “Analogue Fairydust.”

Pronounce, designed by Yushan Li and Jun Zhou, designed a flipbook in response to the chaotic 2020, using the ancient folktale “Nezha Conquers the Dragon King.” The duo drew the story frame by frame with the brand’s signature rope element, in purple ink. Li said the flipbook is a teaser for its upcoming spring 2021 collection.

Tokyo retailer GR8 presented a series of short films with painter Motoaki Higashino, a great-great-grandson of Japan’s Emperor Meiji, talking about how he has embraced punk music and British design over the years, from Vivienne Westwood to Charles Jeffrey. The film’s backdrop was Meiji Kinenkan, a former royal residence where the emperor met with Albert Victor and George V in 1881.

Sun Jun 14 , 2020
The significantly cleaner air being breathed in the UK in recent months is likely to deteriorate over the coming week as the lockdown eases on Monday, triggering a surge in road traffic. Many other countries which have eased restrictions enforced at the height of the coronavirus pandemic have since seen […] 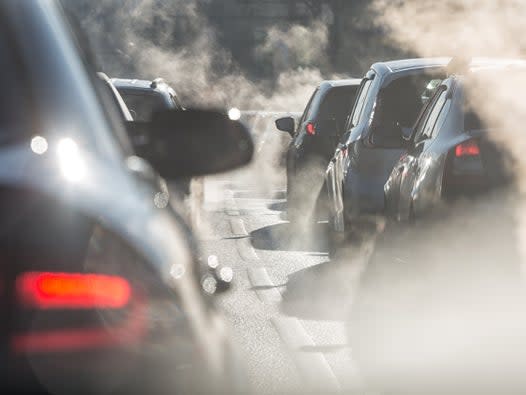