Traders wearing masks work, on the first day of in person trading since the closure during the outbreak of the coronavirus disease (COVID-19) on the floor at the New York Stock Exchange (NYSE) in New York, U.S., May 26, 2020.

This was the summer investors fell hard for risk — at first reluctantly, having just been dumped over the winter, and now avidly.

The approach of shorter days and cooler nights now prompts the question: Has it been too good to last without some hard adjustments?

Submitting to the charms of risk assets was more than a fickle crush or opportunistic pairing. Following the shock of a mandated economic contraction, hazards melted away in ways both powerful and enduring.

The huge fast fiscal-spending push and limitless central-bank money provision not only short-circuited the recession and placed a higher floor on stocks and corporate credit. It provided a real-world experiment in government authorities’ vast spending powers, which no doubt will be demanded in future downturns.

Corporate profits have proved more resilient than feared, both because giant, secular-growth companies account for an outsize portion of S&P 500 earning power and because there has been no painful reckoning of massive bankruptcies.

Leuthold Group’s Jim Paulsen shows the apparent low point in S&P 500 profit margins this year is vastly higher than the troughs of prior recessions.

The economic retrenchment also reset the capital-labor relationship back in favor of capital, companies enjoying cheap financing at a time of ample supply of workers – we went from late-cycle margin pressures to early-cycle earnings leverage without the prolonged purge of a grinding recession – so far.

The Federal Reserve has made it clear as possible it will remain in emergency easy-money mode for years, most likely, allowing the economy and inflation run further in pursuit of full employment. This leaves the markets with a similar monetary backdrop to the start of the last expansion in 2009, but with less chance of something like the taper tantrum of 2013 or the close-call of a first interest-rate hike in 2015, which unsettled markets.

All of this helps explain the remarkable catapult-like rally from the intense panicky lows of March, and goes some distance to rebutting the idea of a stark disconnect between the markets and the still-hobbled economy being denied a fresh round of fiscal help.

Too Much Too Soon?

In broad terms, not too much. Persistent rallies that defy, say, the seasonal tendency for weakness in August and go on long win streaks — such as the S&P setting a record each day last week, or rising 80{5667a53774e7bc9e4190cccc01624aae270829869c681dac1da167613dca7d05} of all days in a month — are signs of underlying strength. This type of behavior tends to come in strong bull markets, and typically not at the very end of them.

Much has been said about the erratic breadth readings, with more stocks down than up about half of all days in August even as the index has been rising. Yet the majority of stocks are broadly in uptrends and in fact, strength has broadened a bit toward cyclical groups in recent weeks, an answer to the complaint the rally was all about a handful of monster-cap growth stocks.

That said, the level of infatuation on display among traders toward at least some parts of the market now invites possible disappointment and disillusionment before too long.

In bull markets strength begets strength — up to a point. The S&P 500 is more extended further above its 200-day average than at any time but one in the past decade. The index’s relative strength index — a measure of momentum — pushed up to 80 Friday — pretty thin air. While, once again, a feature of sturdy bull markets, such readings mean no one should be surprised by a pause or sharp pullback for any reason or none at all.

Bespoke Investment Group, while underscoring the upbeat message of the tape, notes, “Issues that do pose headwinds of various intensity include the upcoming election, seasonality into September, and the recent underperformance of semis versus the broader market. This week, as the market was hitting record highs, the relative strength of semis versus the S&P 500 dropped to one-month lows.”

The speculative buying in call options, especially on the big, beloved tech stocks, has been voracious, driving the put/call ratio to lows not seen in a decade — usually a sign of over-bullishness and complacency in the short-term, though not a perfect contrarian signal. The bloated prices of call options have made strong stocks more volatile as they rise, an anomaly that reflects traders figuratively paying a premium to face value for lottery tickets.

Analysts have been hustling to boost share-price targets on high-momentum stocks, often using aggressive assumptions about growth rates and applying the valuations of the most richly valued peer companies to divisions of others.

We’ve reached a tricky part of this rally, where standard bull-market behavior can also, in the lengthening light of a summer evening, be viewed as overheated recklessness.

Having some perspective on the scale of potential further upside relative to the risk of payback is the trick. Bank of America global strategist Michael Hartnett, spot on with his risk-on call for months now, says the ingredients aren’t yet there for a decisive market top.

Is that appealing enough for smitten investors to stay committed to their summertime fling?

Sun Aug 30 , 2020
People gather on a street corner in the Central Business District (CBD) of Johannesburg. Photographer: Waldo Swiegers/Bloomberg Photographer: Waldo Swiegers/Bloomberg Sign up to our Next Africa newsletter and follow Bloomberg Africa on Twitter South Africa’s National Treasury says there are no additional resources available for government departments in the next […] 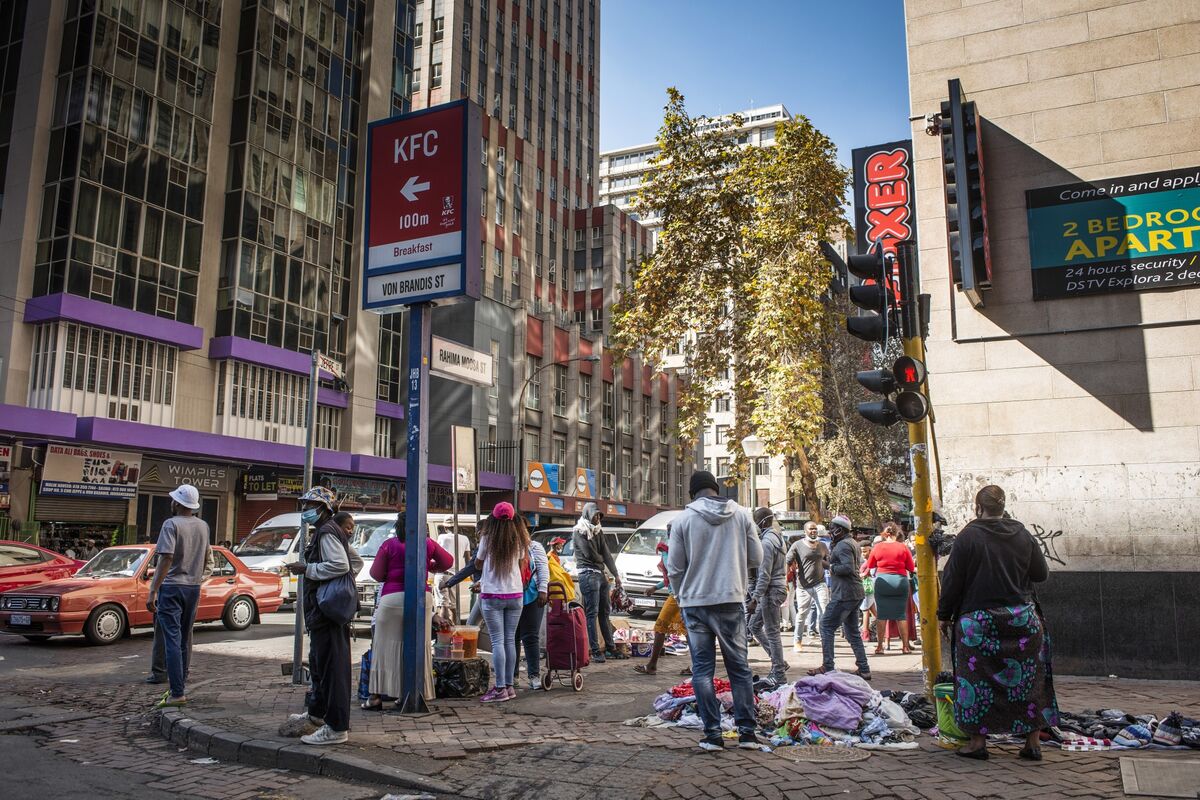