There are some matters in life that can be hard to grasp depending on your life circumstance and outlook. This country is a melting pot of people from all races, colors, religions, and social and economic backgrounds. Getting along sometimes isn’t necessarily easy for some because of differences, but the ideals of America are that we are all different but equal and that under the constitution we all are born with the same rights. Many people of color in America aren’t feeling this way and after many unarmed black lives continue to be lost to police officers, a great movement has exploded even in the midst of a pandemic. We all can learn from paying attention to others. .

Florida head coach Dan Mullen is caught somewhat in the middle of it whether he wants to be or not. Mullen coaches a team that is predominantly black at a university that is mostly white.

All across America college football players have spoken out about the issues that people of color face. Some threatened not to play last month unless the NCAA was to take some actions on these matters and others that affect all college athletes. The movement then was started by the PAC-12 and since then they have at minimum delayed the season until maybe the spring because of the pandemic. But there have been some other programs including in the SEC that have walked out of or boycotted or delayed practices in order to create more noise for the movement.

The latest catalyst for protests comes from the police shooting of Jacob Blake in Kenosha, Wisconsin. The incident represents what the Black Lives Matter movement is all about.  He was the latest of handful of instances of the same ilk that have happened in the last few months and the country and really the world has boiled over with protests on the issue.

It is hard not to pay attention to it and hopefully come out with something constructive. Mullen says that he has learned from it and he wants his players to talk about it and think about it as well.

“I don’t want to speak for all of our student-athletes but I can speak for me,” Mullen said Thursday via Zoom about educating people about what is going on. “I think we talk about them and I’m sure, they speak for themselves and we encourage them to do that. We encourage them to.”

Mullen recognizes what the players have recognized. These players are very important to a lot of people in Gator Nation and because of that, they can get their attention. He would love the players to use their standing to make a difference.

Mullen says that the current environment has enlightened him about the issues as well.

“It’s really hard to do. Change is uncomfortable for a lot of people,” he said. “Change is really uncomfortable, I don’t want to change. I like what I have. To change I have to get outside my comfort zone and change is extremely uncomfortable. People have to try to get a little uncomfortable and people have to try to go learn about other people. Go expand your horizons. Go expand what it is. Don’t just look at something and judge other people or don’t look at someone who is different than you and judge them, go learn about everything.

“I’ve become very educated over the last couple of months. You know what? I would probably look at things (before) and then go form an opinion. Now I look back and I’ve changed my opinions on a lot of things. What it’s taught me is to be very cautious. When something happens you’re going to form an automatic opinion but the smart thing to do is educate yourself and make sure your opinion is well thought of and why you would do what you would do or why you believe in what you believe and challenge yourself to think about those things in every aspect of life.”

“You just read, there was great little thing I just read just to make you think, is when Black Lives Matter comes out and people want to fight and say All Lives Matter. You look at that and say OK, I can see how that makes sense, and then you go educate yourself and go back and think about different things.

“I saw somewhere where the Boston Marathon bombing came out… the Boston Strong shirts came out. Well, why isn’t everybody strong, why does it only get to be Boston that gets to be strong, right? When you think about to me in the terms of that… of course all lives do matter, but that’s not what we’re talking about right now. We’re talking about this specific situation where we’re seeing racial injustice has happened and we’re trying to draw light to that. We’re not saying other things aren’t important. We’re trying to draw light to this. When you can draw on things from a lot of examples, like people all of a sudden want to jump and say… I have to be on a side. No, just educate yourself.”

Mullen kind of put it in terms of the way he teaches his guys to get through a season. Take the issue at hand (the next game) and work on that. It has worked for him well enough over the last two years and his guys have responded. The philosophy worked for him as well.

“What we’re trying to do is educate ourselves about the social injustices happening. It doesn’t mean, when you say Black Lives Matter… I’m forgetting about other people,” he said. “It means I’m focusing on the social injustice issues that we currently have in our country and let’s focus on that. Maybe instead of people jump to other conclusions, it was a really educational thing to think about and really a different way to think for me. When you do it, (make sure this) is the message (you’re) trying to get across here.”

Sun Aug 30 , 2020
In recognition of those disruptive innovators creating positive and diverse change within the financial services space, Benzinga chatted with Mehul Chaudhari, founder at SweepCast. About SweepCast Alongside the COVID-19 coronavirus lockdowns, participation in financial markets rocketed, sparking interest in resources that provide added trading insights. One solution is option order flow, […] 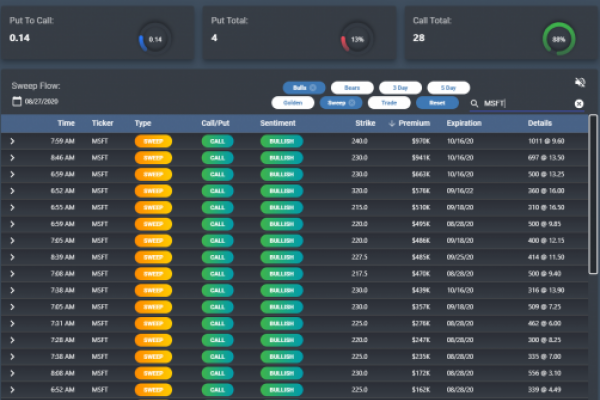