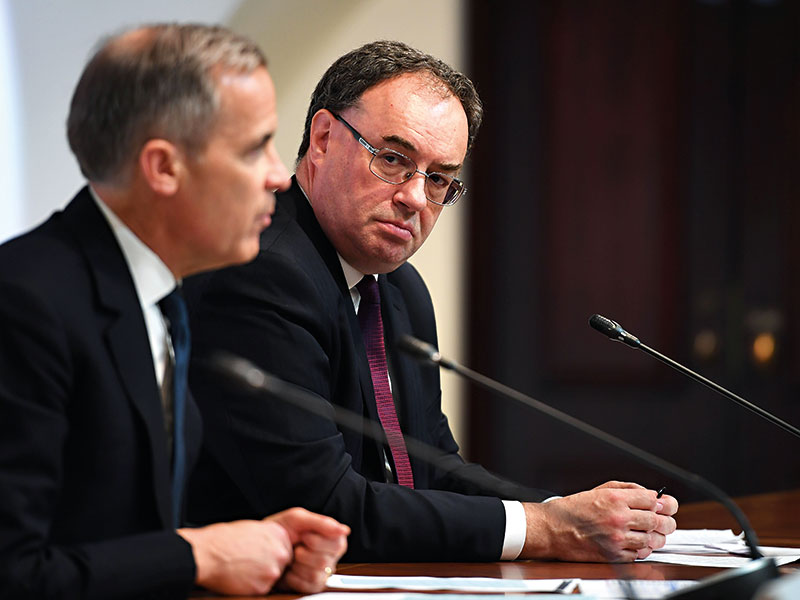 Former and current governors of the Bank of England, Mark Carney and Andrew Bailey&nbsp

When COVID-19 swept across Spain this spring, the country’s second-largest lender, Banco Bilbao Vizcaya Argentaria (BBVA), did not waste time proving its social responsibility credentials. The bank announced on March 30 that its executives would forgo their bonuses for 2020, worth an estimated €50m ($56.26m). “The international pandemic caused by the coronavirus is an unprecedented health crisis,” a BBVA spokesperson told World Finance. “In the context of the measures taken by governments and monetary authorities to mitigate the impact of the pandemic on the world economy, financial institutions have a fundamental, and even exemplary, role in this crisis.”

This role has not always been a priority for banks, which were largely blamed for the economic shock of the 2008 financial crisis. Since then, they have gone to great lengths to convince governments and the public that they have cleaned up their act. Regulation has also contributed to a more responsible banking sector, with the Basel III framework establishing bonus caps and high capital requirements as barriers to unbridled risk-taking. “A major effort has been made to improve ethical standards in the financial sector since the 2008 [crisis],” said William Blair, a professor of financial law and ethics at Queen Mary University of London. “It is important that this work is not lost as we come out of the pandemic.”

Of all businesses hit by the COVID-19 outbreak, banks have been the most anxious to show that they have learned their lessons from the global financial crisis. Bonuses have long been a point of contention in this conversation. As an incentive for high-flying bankers, bonus culture has become integral to the world of finance. However, the coronavirus outbreak has pushed some banks to kick their old habits. Like BBVA, many institutions have announced they will voluntarily skip such payouts this year. Alison Rose, CEO of NatWest, will forgo her bonus and has pledged to donate a quarter of her £2.2m ($2.76m) salary to a charity addressing the impact of the pandemic. Managers at Barclays, HSBC and several other UK banks have made similar pledges, while Citigroup has announced it will offer a $1,000 special compensation award to eligible employees in the US making less than $60,000 a year.

Reputational concerns have partly influenced decision-making at these institutions. BBVA’s spokesperson described the move to scrap bonuses as “a gesture of responsibility towards society, our clients, our shareholders, and all our employees”. For those that shunned this option, transparency will be key. “Businesses will, rightly, need to defend their decisions and will be at risk of damaging their reputations if they cannot defend them as being reasonable and appropriate,” Ian Peters, Director of the Institute of Business Ethics, told World Finance.

For banks that have received state support, either through furlough schemes for their workers or loans and credit guarantees, waiving bonuses and dividends was an essential move. Charles Calomiris, a professor of financial institutions at Columbia Business School, explained: “If the government is investing in a firm to buttress it in the public interest, that company generally should not be permitted to pay common stock dividends while it is receiving financial support, as this weakens the company’s financial position and dilutes the benefits of assistance and places taxpayers at greater risk.”

The blame game
Regulators must carefully consider how they tackle the issue of bonuses. Outright bans may find favour with the public, but they harm competitiveness and raise questions of fairness. Stephen Arbogast, a professor of the practice of finance at the University of North Carolina Kenan-Flagler Business School, said: “During the [2008 financial crisis], management of the banks was culpable for the crisis, so there was legitimate anger towards their leadership. This is not a crisis caused by malfeasance or negligence, so there is a big difference.” Critics have also contested the legitimacy of such measures, given that lockdowns were imposed by governments, leaving banks in many countries with no other option than to shut their doors.

Further, many financial services firms pay executives relatively low salaries supplemented by hefty bonuses, often in stock, to tie up performance with pay. Banning bonuses may make it difficult for institutions to attract international talent. “The purposes of the state and the owners of the firm are aligned when bonuses are used to keep managers during a difficult period,” Arbogast said. “They are looking at their personal survival, and often in a situation like this they want to escape a sinking ship or someone shows up with a better offer.”

Regulatory responses to the pandemic have varied around the world. In late March, the Bank of England banned lenders from handing out cash bonuses and dividend payouts. The announcement was met with dissatisfaction from many institutions. HSBC was forced to withhold dividend payments for the first time since the Second World War, a decision that saw the company questioning whether it should relocate to Hong Kong, where it makes a large portion of its profits. However, the virus’ outbreak coincided with the end of the financial year, when bonuses and dividends are traditionally paid, meaning many British banks had already handed out their bonuses by the time the ban was imposed.

Of all businesses hit by the COVID-19 outbreak, banks have been the most anxious to show that they have learned their lessons from the global financial crisis

In Europe, where the bonus culture is less pronounced, the EU followed an even stricter approach that applied to all sectors. The bloc’s competition unit loosened state aid criteria to allow governments to support vulnerable firms while banning senior management at these businesses from receiving dividends and bonuses. Mergers and acquisitions were also capped at 10 percent.

Some countries went one step further, with France banning companies that received state aid from paying dividends to shareholders, following requests from the country’s powerful trade unions. In the banking sector, the European Central Bank (ECB) ordered eurozone banks to scrap dividends until October 1, a measure that could free up €30bn ($33.76bn) for lending to pandemic-hit borrowers. On the other side of the Atlantic, the US Government placed strict restrictions on share buybacks, dividends and executive compensation for companies making use of government support programmes. However, no such restrictions were placed on banks, nor were they included in the Federal Reserve’s $500bn corporate bond-buying programme.

Above board
The pandemic has also reignited the debate over whether governments should take equity and board seats at bailed-out institutions. While US President Donald Trump has endorsed the idea, Arbogast argues that this approach must be executed thoughtfully, given the nature of the current downturn: “If the government is strapped for resources and is looking to give aid in the most capital-efficient way, there is a case to be made for taking equity. However, there is no case for participating in the management. The institutions involved are not at fault for this economic turndown and no clean-up is required.”

Share buybacks are an equally contentious issue. Critics allege that the practice is commonly used to artificially drive up share prices, diverting cash from other activities. The ECB has ordered eurozone lenders to refrain from share buybacks this year, while Trump has expressed interest in barring companies that received state aid from the practice. In an act of pre-emptive self-defence, some of the biggest US banks, including JPMorgan Chase and Bank of America, have frozen buyback programmes until the end of the second quarter of the year. “If you voluntarily take state aid and you keep doing share buybacks, you are basically flowing this money through to your shareholders,” Arbogast said. “I think there is a serious problem with that.”

The decline in banking’s bonus culture could be one of the lasting side effects of the pandemic. With remote work becoming an increasingly attractive option for bankers, a better work-life balance may erode the importance of financial bonuses. Automation may also contribute to this culture shift by limiting the role of risk-takers at financial institutions, and thus their entitlement to hefty bonuses. According to BBVA’s spokesperson, internal surveys conducted by the bank showed that most of its employees “valued very positively the possibility of having more flexible work opportunities, combining remote and face-to-face work”. They continued: “This crisis has accelerated the trend towards new forms of work. [Our] employees have already singled out this option as one of the most valued benefits.”

Sun Sep 27 , 2020
Home to more EVs in the near future. Ford Ford has been nowhere near as publicly gung-ho on electric cars as crosstown rival General Motors, but the Blue Oval reportedly has big things planned for battery-powered cars. On Tuesday, Reuters reported remarks from Jerry Dias, president of Canadian auto union Unifor, […]