The purpose of this article is to evaluate the PowerShares Dividend Achievers ETF (PFM) as an investment option. As I look ahead to the remainder of the year, I am increasing my defensive positions, including fixed-income products and dividend paying stocks/funds. PFM has re-entered my radar, as the fund has been slightly beating out some of its peers this calendar year. With a inclusion requirement of increasing the dividend for 10 (or more) consecutive years, PFM holds some of the more resilient stocks in the market. Further, the fund has seen dividend growth in 2020, which means the underlying holdings are holding up better than most in a difficult environment. Finally, the fund’s top sector, Consumer Staples, could be considered a defensive play. With consumer spending still below pre-crisis levels and consumer confidence quite low, I would prefer this exposure over more discretionary consumer sectors.

First, a little about PFM. The fund’s stated objective is “to replicate, before fees and expenses, the NASDAQ US Broad Dividend Achievers Index, which is designed to identify a diversified group of dividend-paying companies”. These companies have increased their annual dividend for ten or more consecutive fiscal years. The fund is currently trading at $31.15/share and yields 2.13{5667a53774e7bc9e4190cccc01624aae270829869c681dac1da167613dca7d05} annually. It has been a while since I wrote about PFM, but it was a fund I recommended roughly two years ago. Since that time, the fund’s total return has been quite strong, although it lags the broader market, as shown below: 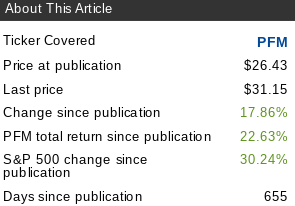 As we move closer to Q4, I wanted to take another look at PFM, as I am considering new ways to lower my overall portfolio risk, while staying invested in equities. While my general outlook for equities as a whole is neutral as we look to close out 2020, due to high valuations and a challenging macro-environment, I believe dividend paying funds will hold up better than average, and I will explain why in detail below.

Performance Is Notable So Far In 2020

To begin, I want to touch on why I am considering PFM right now, despite my generally cautious stance on equities as a whole. I am looking at this fund for two primary reasons. One, I want to continue to increase my exposure to dividend paying companies, but especially those companies whose dividends are time tested. PFM’s inclusion requirements ensure each individual holding has increased its dividend for the past ten years, which makes me more confident that this fund will maintain, or likely increase, its distribution going forward. This compares favorably to the high yield dividend ETF space, which has been a laggard in 2020, with many individual stocks and funds seeing their distributions decline year-over-year. While looking at yield alone can be tempting, the sustainability of the yield is most attractive to me.

The second reason for looking at PFM is performance. Clearly, it is not the only ETF option out there with a dividend growth strategy. However, the fund has been besting other popular options so far this calendar year, including my personal dividend ETF holdings. For comparison, the graph below shows PFM’s year-to-date return compared against the S&P 500, as well as dividend ETFs focused on growth: the S&P 500 Dividend Aristocrats ETF (NOBL), the SPDR S&P Dividend ETF (SDY), and the iShares Core Dividend Growth ETF (DGRO):

Clearly, PFM’s performance in 2020 has been mixed. Yes, the rebound has been swift, but the draw-down during the March lows was concerning. However, PFM has managed to best the other three dividend ETFs I mentioned on a total return basis. This reality has caught my eye, and is making me consider opening a position in this fund in the months ahead, in lieu of adding to my current positions in DGRO and SDY.

Therefore, the performance and outlook of this sector is very important for those considering an investment in PFM. While I noted earlier I am not overly bullish on any equity sectors right now, I do feel some will hold up better than others as we finish out 2020. Consumer Staples, one of the most defensive sectors in the market, is one area I believe will out-perform in the short term.

The reason for this outlook is mostly due to the fragile state of the U.S. consumer. Thus, it has more to do with me having a more bearish slant towards the Consumer Discretionary sector, rather than being overly optimistic on Consumer Staples in isolation. What I mean is, I see a challenging time ahead for discretionary products, as further stimulus measures have stalled, unemployment remains historically high, and consumers are feeling increasingly pessimistic about future prospects.

For support, consider overall consumer spending. While August figures showed increases from July, which many viewed as a bullish sign, we have to consider a longer look-back period to get an accurate picture. While it is true that spending has been rising recently, it is still well below the pre-crisis levels we saw earlier in 2020, as shown below:

As you can see, spending is down quite a bit compared to Q1 levels. This illustrates the challenging consumer environment, with many households seeing a drop (or complete loss) in employment income, coupled with uncertainty around further stimulus measures from Congress. Therefore, I believe this lower level of spending will persist, which should benefit the Consumer Staples sector at the expense of discretionary areas. The logic here is that staples are not as economically sensitive. Consumers still go to the grocery store every week, visit the pharmacy, smoke tobacco, and/or use household cleaning products. All of these areas are within the Consumer Staples sector, and should see consistent demand, while discretionary areas are more likely to see a cutback.

Of course, investors may consider the worst to be over, and thus view this as an opportune time to move in to discretionary areas, which is the opposite of my thesis. This could make sense, as employment rolls begin to increase and states continue re-opening their local economies, discretionary areas could indeed get a boost. However, i would personally refrain from getting too optimistic on that scenario right now. To understand why, let us consider consumer confidence levels, which have recently reversed their recent climb. In fact, consumer’s attitudes about both their present situation and expectations for the future have both dropped off sharply, as shown below:

My takeaway here is that the consumer climate is very difficult right now, and recent sentiment readings suggest it could stay this way for a while. While equity markets continue to surprise me to the upside, I remain hesitant to build on discretionary positions. I see a disconnect between economic reality and the market mentality, and would therefore prefer to focus on the companies that sell products consumers need, as opposed to want. This helps justify my recent interest in PFM, which is long the Consumer Staples sector.

Dividend Growth Continues In To 2020

Another important point for PFM has to do with the fund’s dividend. While the current yield at just over 2{5667a53774e7bc9e4190cccc01624aae270829869c681dac1da167613dca7d05} does not seem very attractive, what excites me is the fund’s dividend growth so far in 2020. In such a difficult environment, with many major companies announcing dividend cuts or suspensions, PFM’s ability to increase its distribution level is a major benefit. Not only that, but the year-over-year growth is actually quite high, which frankly surprises me. To illustrate, the total distributions for 2020 are compared against those paid during the same time period in 2019, as shown in the chart below:

Ultimately, this is a strong signal. While the absolute yield remains relatively low, it still has a positive spread over treasuries and other fixed-income products as the Fed lowered its benchmark rate earlier this year. Further, this high level of growth supports the yield, and could continue to rise in the second half of the year as the economy gains a better footing. Overall, this metric gives me confidence in the fund, as such a high level of growth is clearly not the norm at the moment.

Expense Ratio Is A Drawback

My final point on PFM has a more critical view. A key reason for my reluctance to utilize this product in the past has been its expense ratio, which remains high to this day. This prevents me from being overly bullish on this fund, as the expense ratio seems high in both isolation and when compared to its peers. While I expect PFM to charge more than a broad index strategy fund, given its stricter criteria for inclusion, PFM is not the only ETF out there that has a dividend growth strategy. The funds I mentioned earlier, SDY, NOBL, and DGRO, all have dividend increase requirements, yet they all charge investors much less to own them.

To puts the fund’s expenses in to perspective, consider the chart below:

My takeaway here is straightforward. PFM charges a bit too much to own it, when we consider what alternative funds charge. While recent performance has shown that PFM can out-perform even with a higher expense ratio, I don’t like the idea of over-paying for the longer term. Whether or not an investor thinks .54{5667a53774e7bc9e4190cccc01624aae270829869c681dac1da167613dca7d05} is too high is ultimately an individual decision, but I have to point out that many alternative funds exist with more modest fees.

For investors, such as myself, who are looking to play defense, PFM could be a valid choice. The fund does have an attractive make-up for a defensive position, with a high weighting towards the Consumer Staples sector. Further, its dividend growth inspires confidence, as sustainable yields attract me more than high yields right now. However, equities as a whole are very richly priced, and PFM’s expense ratio gives me pause as well. Therefore, I am considering opening a position in PFM, but would caution investors to be selective about their entry points, and to set modest expectations for returns going forward.

Disclosure: I/we have no positions in any stocks mentioned, but may initiate a long position in PFM over the next 72 hours. I wrote this article myself, and it expresses my own opinions. I am not receiving compensation for it (other than from Seeking Alpha). I have no business relationship with any company whose stock is mentioned in this article.

Additional disclosure: I own DGRO and SDY

LINK/USD free-falls to $16, wedge pattern reversal in the offing

Tue Sep 1 , 2020
Chainlink hits highs above $17.50 on the weekend but bearish pressure took precedence leading to the ongoing breakdown. LINK/USD could resume the uptrend, especially if support at $16.00 holds and the wedge pattern breakout comes into the picture. Chainlink hit a high of $17.73 over the weekend after recovery from […]