Amid a global pandemic and a nationwide reckoning with systemic racism and discrimination, Nicole Maines is doing her best to find the joy in Pride Month. “Pride, to me, is a celebration,” the Supergirl star tells ET. “I think it’s very, very easy to get bogged down in the fight for social justice and it is very easy to be weighed down with all of the hardships and the traumas that we as a community go through, throughout the year.”

“Watching all of the new bills introduced to attack us, and every stupid anti-LGBT thing Trump tweets, I think it’s so easy to get angry and sad and to feel overwhelmed,” she notes. (In 2020 alone, over 70 anti-trans bills have been introduced at the state level, many aimed at medical treatment and care for transgender kids.) “I think that Pride is a time to recognize that, but let all the sadness and the anger attached to that go and celebrate how far we’ve come. Celebrate the fact that we are even able to march in the streets and be openly gay and openly trans and wear glitter for a shirt. Celebrate the culture and being able to be a part of the community and just be happy — unquestionably, no strings attached, just, happy for a month.”

Maines adds, “Life is hard enough as it is and we deserve to just not have to be sad for a minute.”

Pride is obviously different in a number of ways this year, for Maines and many others. The actress is stuck at home with her family in Texas, but has stayed hard at work making calls and raising awareness online for intersectional LGBTQ causes. “Right now, I’m trying to use the social media platform that I have to lift up the experiences of people of color and queer people of color especially,” she explains. “I’m in a unique position, where I have enough of a platform that I can amplify to a pretty significant degree the experiences of people who otherwise wouldn’t be heard… and make sure that people know their names and their stories.”

As a visible member of the transgender community, Maines says she understands that advocating for LGBTQ rights and speaking out against systemic racism go hand in hand. “One of the number one things that I want people to recognize is that oppression is an intersectional issue, through and through,” she explains. “You know, we all have different facets to our identities, and many of us face oppression on multiple fronts. And I think queer people of color, especially right now, are in a particularly dangerous spot.”

“It’s really, really important to draw attention to their voices, and to their experiences, and pass them the microphone and say, OK, you know what? Right now, the world is listening, finally. So let’s not only talk about this on the racial front, but let’s also talk about this as a queer issue as well because, while I think we do have the world’s attention, why only focus on one facet of identity when people are being brutalized and targeted because of other aspects of their identity, as well?” she says.

Maines’ “coming out” story, like many transgender people, began almost at birth. She says she knew she had been gender misassigned as early as three or four years old, and recalls asking her parents, “When do I get to be a girl?”

“I think that’s the case for a lot of young trans kids,” she observes. “I think a lot of us have this very innate sense of self, when we know who we are. And we don’t know that it’s ‘wrong’ until people tell us that it’s wrong.”

Growing up in Portland, Maine, the actress notes that she was “very fortunate” to have parents — and an identical twin brother, Jonas — who put the work in to understand and support her journey. “My father, while he didn’t understand it, it was never a point of like, ‘Oh, you’re going to hell. Oh, you’re a bad person for doing this. Oh, you yourself, as a person, as a being, are fundamentally wrong.’ It was never like that,” she recalls. “It was never a matter of being right or wrong, morally. It was a matter of being right or wrong, factually. And factually, I knew I was right, so I didn’t see what the problem was.”

Looking back on her transition, which began in the first grade, Maines credits her father for going “on a transformation” with her. “More so, possibly, because I didn’t really need to go through transformation or really a journey,” she notes. “I was who I was from the beginning — my transformation was more social and physical than anything, whereas his really was a rewiring of a whole lifetime of learned experiences and learned ideals.”

While she was lucky to have parents who ultimately supported her gender identity with grace and encouragement, Maines knows that’s not the case for every member of the LGBTQ community — offering some words of advice to anyone who might be struggling to accept a friend, family member or loved one who has come out to them about their sexual orientation or gender identity.

“You need to assess yourself and you have to get comfortable with being uncomfortable, because plot twist: That’s where your child is right now, uncomfortable,” she explains. “And then you have to ask yourself, would you rather have a happy child or a miserable child? Would you rather open yourself up to this new experience, learn something, and let your child be happy? Or would you like to stand firm in your beliefs, stick to your guns, and have a miserable child? An angry child, a resentful child, a self-harming child, or possibly a dead child because that is a very real possibility.”

“A lot of parents of trans kids have had to ask themselves, do I want a happy daughter, or a dead son? And a lot of them will choose a happy daughter every time,” she says. “Because it is not worth losing your child over being stubborn in your beliefs and thinking that you know everything…. Your child is going to be trans, your child is going to be gay regardless. You really just have to question, how much a part of that chid’s life do you want to be?”

One hopeful Pride Month moment for the LGBTQ community as a whole came on June 15, when the Supreme Court ruled that the Civil Rights Act of 1964 applies to discrimination based on sexual orientation and gender identity, affording previously unprecedented legal protections to gay and transgender people who face workplace discrimination.

Maines, who celebrated the ruling with enthusiastic social media posts — “Finally some good news,” she tweeted — is no stranger to groundbreaking legal rulings. As a teenager, she was the anonymous plaintiff in the now oft-cited Maine Supreme Judicial Court case Doe v. Regional School Unit 26, which ruled that it is unlawful to deny a transgender student access to the bathroom consistent with their gender identity.

“That was the first time that a court at that level had ruled in favor of a transgender family, and it set a precedent for cases like that, because what was so special about our case was that it was not in any way, shape or form special,” recalls Maines, whose family was at the center of the groundbreaking legal case after a fellow student’s grandfather complained about her using the girls’ bathroom at their school. “It is happening to trans kids and their families across the country, so constantly!”

“We all have a bathroom story,” she notes. “This is something that’s happened to everyone and it continues to happen… It’s just the first time that the court realized, oh wait, yeah, no, you have rights.”

While the ruling, of course, didn’t put an end to the legal battles that transgender children and teens can face in their schools, Maines says she’s encouraged by the fact that there is “more information than ever” available for kids and families who are striving for inclusion. “It’s about making sure that you know what your rights are,” she reinforces. “Working with the school and trying to make sure everyone is safe, happy and comfortable. Because at the end of the day, that’s what it’s about — it’s about everybody feeling comfortable and safe in their own skins.”

Somewhat fittingly, after breaking barriers in real life, Maines was cast as television’s first transgender superhero, in her role as Nia Nal, aka Dreamer, on Supergirl — joining the show in season 4. The CW series was shut down due to the coronavirus pandemic just before completing their final episode of the fifth season, which left fans without resolution to some major “bittersweet” cliffhangers, but the actress promised they’ll be back and better than ever in 2021.

“I think next season I would love to see [Nia] more at CatCo,” she says of her hopes for season 6. “I would really like to see her kind of branching out in her interactions. She’s had a lot of scenes with Kara and with Brainiac.”

“We saw Kelly and Nia starting to get along… I’d love to see more of that dynamic,” she adds. “I’d love to see Nia and Lena do something, because I think we’ve existed on totally different, opposite ends of the show for the past two seasons, and we haven’t really had a reason to hang out or work together. And I think now that all the super identities are out in the open, I think it could be really cool to kind of see Nia and Lena work together.”

“And I love J’onn and Nia. We’ve seen that duo a couple times and I think that’s really fun ’cause they’re both kind of mystical, and I love that duo,” she notes with a laugh. “I have my own personal headcanon that J’onn and Nia drink frappuccinos and are just, like, the mean girls of the group.”

As for how much of her character she sees in herself, Maines says it all comes down to the desire to do good in the face of oppressive opponents. “I think the longer I play this character, the further the line blurs,” she observes. “We’re both driven to use the platforms we have to advocate for marginalized groups — with Nia it was advocating for alien rights in season 4, and standing up for trans folk in season 5.”

Pride 2020: LGBTQ Films and TV Shows to Watch in June

Wed Jun 17 , 2020
Michael Bloomberg came and went quickly in the 2020 presidential campaign. He entered the race last November, spent $1 billion on staff and ads, rose briefly in the polls, then quit on March 4, after Joe Biden’s unexpected surge. Bloomberg has been mostly quiet since. But the publishing titan and […] 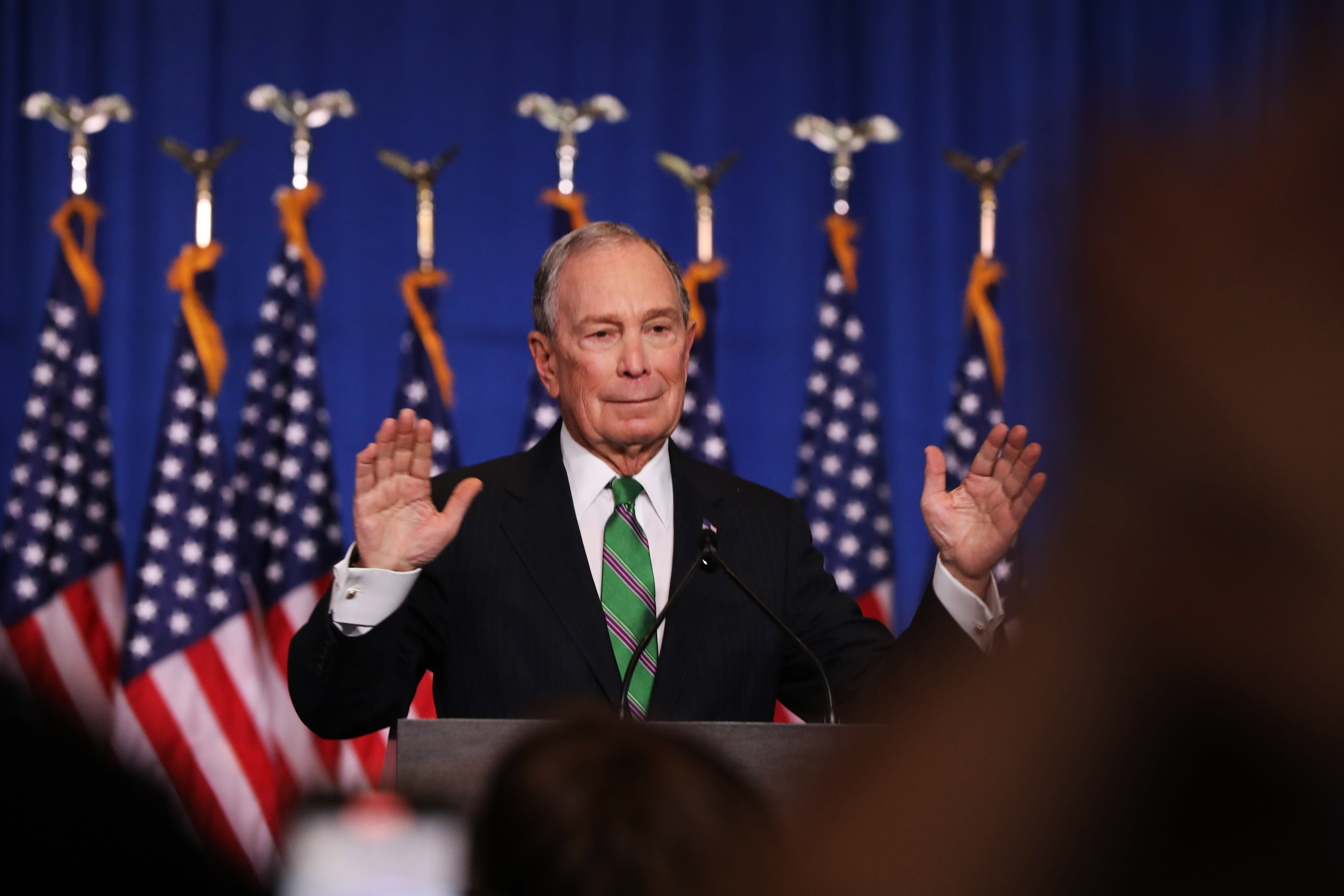