Tens of thousands of people have poured onto England’s high streets as non-essential shops were allowed to reopen for the first time since lockdown began. While many of those who stepped out despite coronavirus fears to engage in some long-awaited retail therapy cited concerns about looming job losses in the […]

Tens of thousands of people have poured onto England’s high streets as non-essential shops were allowed to reopen for the first time since lockdown began.

While many of those who stepped out despite coronavirus fears to engage in some long-awaited retail therapy cited concerns about looming job losses in the sector and a need to restart the economy, the overwhelming sense was of people urgently seeking to regain a sense of normality after 11 weeks in stasis.

Despite the busy street scenes captured across the country, with reports of overnight queues which sometimes remained throughout the day, the unseen majority will have remained at home, with some newly returned employees questioning why customers were physically shopping rather than purchasing online.

A leap towards the ”new normal” pledged by ministers was perhaps the prevailing theme of the day, evident in the extensive range of new measures taken by stores to keep employees and customers as safe as possible.

Shoppers, already familiar with socially distanced queues, were offered hand sanitiser upon entry, found fitting rooms closed and, in some cases, lip service was paid to ”quarantines” for items touched by customers.

However, the complexity in policing some new measures was clear at a glance, with many shoppers visibly struggling not to pick up items as they browsed and staff naturally unable to take stock of all such occasions when items were placed back on the rack, rather than in quarantine.

In one instance, the excitement in the crowd awaiting entry to Nike Town at Oxford Circus bubbled over into tension, with bodies packed up against the door.

There were reports of some punches being thrown in the melee, as staff sought to calm the crowd. As police surveyed the packed queue, one officer branded the situation “ridiculous”, adding that they foresaw more such events throughout the day.

Despite the health risks, many people who turned out to Britain’s busiest high street – where The Independent visited to witness retail’s return – appeared keen to resume some sense of normality, with many appearing somewhat fatigued by lockdown measures.

Queueing outside a Zara on Oxford Street at 9.30am, Patricia, a 54-year-old from Sutton explained that she had been enticed by the sales, and had travelled to the largest branch because a lot of items were sold out online.

She said she was “confident” that stores were taking the appropriate measures to return safely, but cited concerns about public transport.

“I am probably quite reassured that it’s going to be done in the right way. It’s a big store, they have to adhere to the rules,” she said, adding: “I’ve got heart problems so I was worried about the congestion on the train. It’s not so bad on trains, but on the undergrounds there’s no social distancing, everyone’s together.”

Discussing the fact that face masks remain optional in shops, she added: “I’m not happy with that at all. If you have to [wear them] on the underground, why not in stores? It doesn’t make any sense.”

Asked about Boris Johnson’s review of the two-metre social distancing rule amid calls from his party to replace it with a shorter distance to boost the hospitality industry’s recovery, she replied: “I wouldn’t go out [if it was reduced]. Because I think we’re not sure. I think it’s too early for a one-metre distance.”

On Sunday, the prime minister urged the nation to “shop, and shop with confidence”. Saying he was “very optimistic” about the looming return to the high street, he admitted that there could be either a “huge wave” or a “trickle” of customers.

While, by lunchtime, the growing Oxford Street crowds – pocked with a wealth of new signs reminding people to socially distance – appeared to suggest something of a wave, one shopper flatly refused to credit Mr Johnson.

“I wouldn’t listen a word he said [or] his government, either,” said Paula, a 62-year-old from Crystal Palace. ”I’m just a Londoner that likes Oxford Street and Covent Garden, and will always be happy coming into town and taking my chances.”

Enticed by a 50 per cent discount for NHS staff at Sports Direct, where she stood in a long queue, Paula said it was the first time since January she had ventured into central London because of coronavirus fears.

“Because I’m an NHS worker, you know it’s coming, you know it’s there – so I avoided it like the plague, and now I feel it’s probably slightly safer. Obviously social distancing will be difficult … but there is hand sanitiser everywhere, people are trying.

“[I’m worried about] everyone’s wellbeing, because people are going mad stuck in rooms, not able to go out, [or] really frightened to go out, and it shouldn’t be because life is life. It’s unfortunate – one day we’re all going to pass away, you might as well live while you’re waiting to pass away.”

Paula said that her workplace had been hard-hit by coronavirus, saying: “We’ve had masses, so Covid doesn’t bother me because I’ve had so much contact with it. If I drop dead, I drop dead.’”

Asked whether concern for the economy had influenced her trip, she replied: “God yeah, people are losing their jobs left, right and centre and that’s the frightening thing is that come Christmas, there’ll be so many people unemployed. Nobody will be shopping and the economy will be really flat, and then you’ve got a no-deal Brexit potentially on the horizon. It’s just going to be a nightmare.”

She added: “I think there’s never a right time [to reopen shops] in the middle of a pandemic. I think you’ve got to do it at some stage, because the economy is just completely buggered at the moment, so you’ve got to say ‘okay, let’s open some shops, get out there and see what happens’. If the R rate goes up, then they’ll have to rethink.”

With data from Springboard showing that footfall in English high streets was up by 51.7 per cent on Monday from the previous week – although down by roughly a third from the year before – some suggested they would forego larger, more crowded stores for independent businesses.

“I won’t be shopping in any major outlets as frankly I think it’ll be too busy and queues will be extremely long. Whereas boutique stores may have a much more personal and relaxed atmosphere,” said Alex Noble, a 26-year-old living in Fulham who runs fashion blog Always Never 101.

“I am happy for independent retailers, who perhaps hadn’t focused on their websites and social media before lockdown, and thus have really felt the brunt of no custom.

“They can open their doors and get back to what they do best. What’s more, they’re probably not able to offer huge sales and discounts online, and so have likely suffered from larger brands being able to do this – I must admit I’ve capitalised on these online sales.”

While undoubtedly significant numbers of the thousands returning to work would have been reluctant to do so, the employees at international retail brands spoken to by The Independent said they were happy to be back and satisfied that their employers had taken significant steps to ensure their safety.

Speaking in a moderately busy Gap store on Oxford Street, one 25-year-old sales associate said: “I think this is the right time [to come back]”, adding he felt he would be safe “as long as I keep on top of the hygiene, so washing my hands with hand sanitiser when I take [my gloves] off. I have a mask as well, but it’s a bit too hot.”

Ross, a skateboarding instructor at The Bowl in Selfridge’s – which was filled with excited crowds of all ages – said that he felt the return could have come quicker.

“There’s a lot of safety measures and one-way systems and social distancing, so it’s a bit different but it’s nice to be back, nice to have a bit of normality back to real life,” he said.

“[The mood among staff] is pretty happy, I think, at least we’re moving forward to getting back to how it was before and not being isolated. You can actually to talk to people, even if it’s at two-metres, it’s still nicer than not talking to anyone.

“For a lot of people, it could have come quicker, I think. Some people I’ve spoken to really enjoyed the time off and could have done with another month in the good weather, but the majority are glad to be back I think.

“I feel pretty confident [in terms of health and safety], I’m not worried at all to be honest. I don’t take the tube to work so I guess I’m going to get less risk. I’m not that phased by it, I haven’t had anyone be affected by it personally so I’m not that scared.”

Despite many stores having recalled some members back to work weeks ago, or even keeping some in-store throughout lockdown to prepare for the new methods of operating, some suggested the return had been too soon.

“Eventually it had to happen, but I believe the UK government should have waited until July. I know the rates have gone down, but just to have more stable ground,” said one assistant manager at the store of a global brand in Camden.

She added: “The shop floor isn’t ready. Product-wise, we’re missing hella stuff. But as a shop, for me and for my staff and having the right training and the principles we’re going to follow, absolutely we’re ready.

“[The past two weeks in-store have been good because] now I know what to teach my staff what we’re doing, but it’s also given me time to mentally prepare.

However, she added that there could be a feeling of resentment among some staff that customers are visiting the store rather than safely shopping online.

“I don’t see the point in going into a store when I can buy it online. And I think during lockdown more people have realised that,” she said.

“For me, I don’t see why people are coming out shopping now. Nobody needs a pair of trainers this much. I think it’s going to be the case of people leaving their home because now they can, so it’s going to be an excuse.”

Experts unable to give full information on local clusters until August

‘They can blame it for everything’: What coronavirus means for Brexit

The Americans who think that coronavirus is a hoax

Do you need a face mask and where can you buy one?

UK lockdown: Can I see my family and friends under new rules?

Tue Jun 16 , 2020
It’s summertime, and the livin’ is easy. The American cookout is in season, and savory staples like hot dogs, hamburgers and corn on the cob are roasting on grills across the country. Between beers, burgers and potato salad, hosting a backyard barbecue can burn a hole straight through your wallet. […] 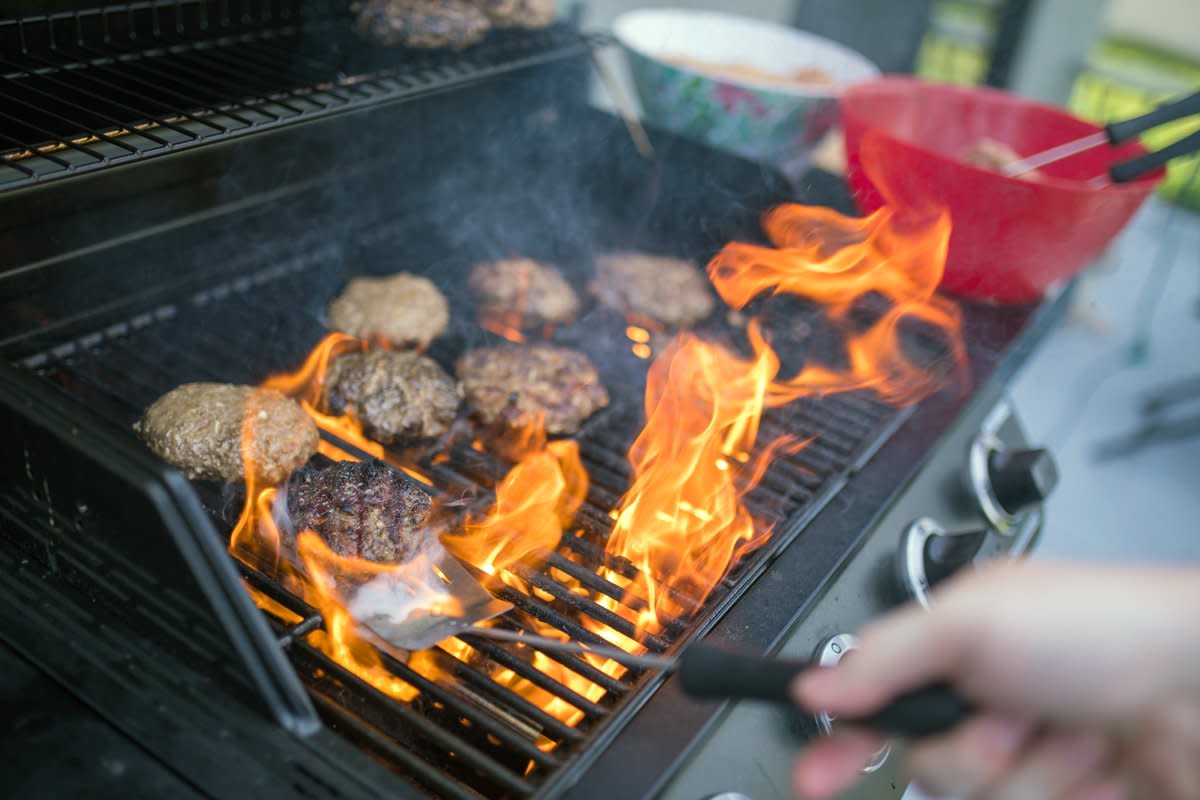