Shayla Avery texted a friend after the police killing of George Floyd in Minneapolis, nearly 2,000 miles away in Berkeley, California. “We should do something,” wrote the 16-year-old high school student, frustrated that her teachers were not talking about it. So they started planning and a few days later, Avery, […]

Shayla Avery texted a friend after the police killing of George Floyd in Minneapolis, nearly 2,000 miles away in Berkeley, California.

“We should do something,” wrote the 16-year-old high school student, frustrated that her teachers were not talking about it. So they started planning and a few days later, Avery, together with two school friends, had organised her first protest.

Related: These protests feel different. There’s cause for hope – but also a very long road ahead | Sandra Susan Smith

She thought their march, Stand with Black Youth, would attract about 100 people, but they turned up in their thousands. “If you’re determined and you’re really about what you say, then all you need is a strong voice,” Avery said.

In the three weeks since Floyd’s death, stories like this of young people taking it upon themselves to mobilise and make their voices heard, in many cases for the first time, have been replicated across the US in a wave of Gen Z-led protests.

“It’s been really powerful to see that young people are leading the events of the past couple of weeks and in the large majority of cases it is Black youth who are organising protests in their communities,” says Sarah Audelo, executive director of Alliance for Youth Action.

The unprecedented ability to rapidly share information and organise remotely online has been key to their success. Social media platforms including Instagram, Twitter and TikTok are crucial tools to inspire and educate others.

Teighlor McGee, 22, who works for Women for Political Change in Minneapolis, where she has been distributing personal protective equipment and coordinating medical help to protesters through her online platform Black Disability Collective.

She got involved in activism as a teenager following the police shooting of Dontre Hamilton in Milwaukee, Wisconsin, in 2014. Going to the protest inspired her to become an organizer herself.

She says this time is different.

“It definitely has to do with Gen Z but not even Gen Z, but specifically with Black youth and the Black youth who are organising and trying to spearhead this work and this movement.”

Students Jacqueline LaBayne, 23, and Kerrigan Williams, 22, met online the day after Floyd’s death. Three days later they started creating the group Freedom Fighters DC. Today they have more than 23,000 followers on Instagram and have organised a sit-in and a protest in Washington DC attended by more than 2,000 people. They also signed up “hundreds” of people to register to vote.

“We were not expecting this. We were only expecting 12 people to come out and march with us. We didn’t expect there to be hundreds and even thousands of people on Saturday,” says LaBayne. They have been inundated with donations, volunteers and emails.

While they have both attended protests in the past, none of their seven-member group has experience in organising them.

“We’re all just very passionate in our purpose and we were just walking in the steps that guide us with the freedom fighters that came before us,” says Williams.

While some Gen Z activists say they are taking inspiration from prominent activists such as Angela Davis and Shaun King, they appear to be most motivated by the urgency of the issues and each other.

Omer Reshid, 18, a high school student who co-organised a protest in Towson, near Baltimore, said: “Ever since the video [of George Floyd’s killing], a lot of us, especially African Americans, have been feeling very angry and frustrated, but also scared. I know for me as a Black man it’s only a matter of time until I face racial discrimination that’s going to lead me to put myself in a situation that has my life on the line and that’s really scary to me.”

Over the years, Reshid, who is a student board member for Baltimore county, has been to numerous protests – for issues including Black Lives Matter, climate action, school funding and gun bans.

But this time he feels a fresh sense of hope. “I’ve seen people who I’ve never seen come out, come out and support … The youth is really tired of what’s going on and a lot of people are starting to wake up against the racial discrimination, systemic racism that happens in our country.”

He is already seeing the impact of the protests, he says, which will continue for “as long as it needs to be”.

The last few weeks have changed his life and he is now considering studying political science or education. “Today’s protesters are tomorrow’s leaders … I know that the fight for justice, for equality, the fight for change, it did not start with us, but I’m confident that it will end with us.”

Younger teenagers are connecting with others to organise and finding out about police brutality and systemic racism via social media independently of their parents. Some are using TikTok to tearfully air their grievances about their parents’ views.

Emma Rose Smith, 15, co-founded Teens4Equality, with people she met on Twitter. The group of six 14-16-year-olds organised a march attended by reportedly tens of thousands of people in Nashville. Smith says although her mother is supportive, she didn’t know she was organising a protest until two days beforehand. Next they are planning a protest for 4 July.

“I’m part of Gen Z, the future generation. So it’s me and my generation’s right to make change because our ancestors didn’t,” she says.

With so many potential first-time voters becoming involved in protests – and in turn more politically engaged – the movement could have a real impact on November’s election.

Kei Kawashima-Ginsberg, director of the Center for Information and Research on Civic Learning & Engagement (Circle) at Tufts University, says Gen Z have been politically engaged – particularly with racial justice – from a young age are well ahead of older demographics when it comes to support for Black Lives Matter. They are most mobilised by their friends, she adds.

Between 2016 and 2018, 18-24-year-old participation in protests and marches rose from 5 to 15% – a number she expects to rise considerably following the latest protests.

“Even if the young people may not feel thrilled with the presidential candidates, either one of them maybe, but I think they will find plenty of reasons to vote – especially with the rise of protest.”

LeeAaron Berks, 19, a college student and athlete, had never spoken in public or been involved in activism until joining the protests in Lincoln, Nebraska. But in the last few weeks he has helped form a new non-profit, the Black Leaders Movement, and is giving speeches, protesting five days a week and meeting with politicians. He is planning to register to vote.

“I just felt like it was time to take charge, take initiative to create an actual change instead of waiting for someone to make a change,” he says.

Nykeyla Henderson, 17, put on a protest last Monday in Springfield, Illinois, that she says was attended by more than 1,500 people.

For several days in a row the musician and fast food worker went straight from work to the streets to protest for nine hours each night. Now she plans, with her youth organisation Black People Party of America, which was founded by her late father, to take action and put on community events.

“I really do think that George Floyd changed the world, honestly. I think he’s changed it to the point where people are mad enough that people are like: ‘Man, I’ve got to get out here and vote.’ We cannot keep letting this go on.”

Long queues as shops reopen in England after lockdown

Mon Jun 15 , 2020
Pent-up demand has prompted queues at some shops as rules are relaxed in England after a three month lockdown. Long queues were reported outside Primark shops in London and Birmingham ahead of their 8am opening time. The chain, which like other clothing shops has been closed since 23 March, does […] 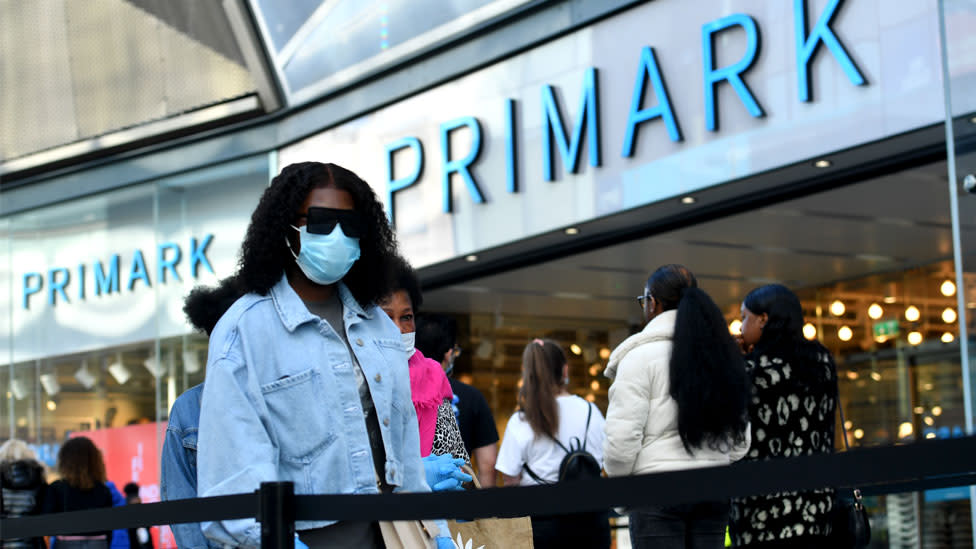