With all the day-to-day noise that we are presented with in the market, it is important to remind ourselves of what consistently drives the market; fear and money-flows. In this piece we focus on the latter.

A poker game around the fold-out table in your recreation room is not an open system; it is both a closed system and a zero-sum game. This means that the aggregate amount of money in the game is fixed, and that the money will flow around the table as the players who lose, transfer the money to those who win. Normally, no outside money comes onto the table, and the amount won equals the amount lost (a zero-sum game).

The economy and the market are not like that. They are not zero-sum games — at least not in the long-term. They are open systems because new money is able to move onto the table, so-to-speak. Where does this new money come from?

The new money comes from the federal government’s budget deficits which involve the creation of money by the monetarily sovereign state. This is something that cannot happen at your poker game, and which–again, unlike your poker game–makes it theoretically possible for all participants in the market to win at the same!

The chart below shows how the wealth in the stock market has been increasing over the last 100 years (M2 data not available before 1980). If it was a zero-sum closed system, the overall value of the stock market would have stayed constant — just like the overall money at your poker game stays constant.

The bank credit money, has stopped growing. This means no “new money” is being created by the banking system (chart below). The money driving the stock market higher since the beginning of May is not credit money.

So, if it isn’t bank credit money that is pushing the market higher, then it must be sovereign money creation that is doing it.

In July of this year, there was a large tax collection which included the April taxes that had been deferred. This removed billions of dollars from the economy and sent the 20-day MA of the Treasury budget into surplus.

In August, the 20-dMA of the budget came back into deficit (-$14 B/day) and is helping to sustain both the economy and the stock market (chart below).

The budget deficit is eventually registered as Treasury securities (Alan Longbon has calculated that it takes ~6-weeks) and added to what is mistakenly called the National “debt”. It is not debt, because the government has not borrowed any money. It has simply accepted dollars, that it itself had created, into a Treasury security which is a type of savings account that pays interest; nothing is borrowed.

The Federal Reserve does not “print money”. What it can do is monetize–buy outright–these outstanding Treasury securities, which simply puts the original dollars back into the non-government sector (quantitative easing, or QE).

This QE is done through the SOMA (System Open Market Account) at the NYFed. When the SOMA balance is increasing, it means that the Fed is exchanging the “yellow dollars” (Treasury securities) which are locked away, for “green dollars” that are free to be invested elsewhere in the economy, i.e. liquidity. For this reason, the stock market always rises when the SOMA balance sheet is increasing, and tends to weaken when it is being reduced. In the latter case, the market starts rising again as deficit spending increases and pushes the National “debt” higher (chart below).

If the SOMA, the “debt”, and bank credit have all stalled, the question is where is the money coming from to push the market higher? The answer lies in two sources; the TCB and the money market funds.

The Treasury cash account balance (TCB) had been loaded up with a record $1.8T between March and July, as a consequence of the increasing “debt”. Since mid-July, $250B of it has been released into the economy via the automatic stabilizers. This is part of the source of funds fueling the market higher (chart below).

In addition to the funds coming out of the Treasury, a further $240B has flowed out of money market funds and into the stock market during the past three months (chart below). 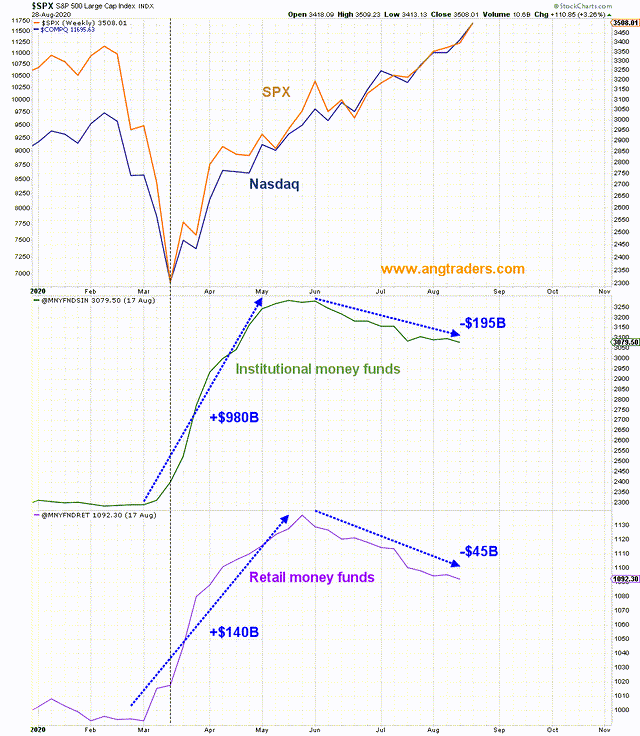 There is still almost $1T in the money funds in excess of what was there before the pandemic. That, along with the $1.6T sitting in the TCB (which is more than a $1T above the average balance) should continue to support the market….despite the large number of technical indicators that are obviously over-extended (but that is another story).

“ I am SO VERY thankful for the discovery of this site, and the wisdom and knowledge I have gained ... “

” I have not seen this type of analysis anywhere else. Please keep up the awesome work! – James “

“ Happy ANG subscriber here. I believe them to be the best broad market analysts on seeking alpha. “

” Best here in seeking alpha…@ANG Traders . Best of the best! “

“It is probably the only report of its type on the planet when you think about it.“

Take advantage of our14-day free trial and stay on the right side of the market and Away From the Herd.

Wed Sep 2 , 2020
The title of this year’s report — Resilience and Renewal — underscores the character of Voya’s employees and its enterprise. In the midst of these extraordinary times, Voya’s resilience enabled the company to operate exceptionally in an environment where rules and dynamics changed abruptly. Voya’s corporate values come to life […]