The engine of the United States economy – consumer spending – kept humming along in July, but at a decelerated pace from the previous two months.

American consumers increased their spending by 1.9 percent in July, government figures showed on Friday, providing support for an economy struggling to emerge from the grip of a pandemic that has held back recovery and kept roughly 27 million people jobless.

Friday’s report from the Commerce Department also showed that income rose 0.4 percent in July after two months of declines.

The consumer spending report arrives amid a hazy economic landscape, with high unemployment, struggling businesses and deep uncertainty about when the health crisis will be solved and when people and companies will feel confident enough to spend and hire normally again.

It also comes weeks after the expiration of a $600-a-week federal unemployment benefit top-up deprived millions of a key source of income and dimmed the outlook for consumer spending.

Real-time tracking data from JPMorgan Chase shows that credit and debit card spending had softened by early this month in states with high unemployment compared with states with lower unemployment. But Chase economists said they saw little sign that the expiration of the $600 benefit has so far caused any major economic setback.

Chase said its tracker of growth in spending by 30 million Chase cardholders compared with a year ago had actually risen slightly since the $600 benefit expired late last month. 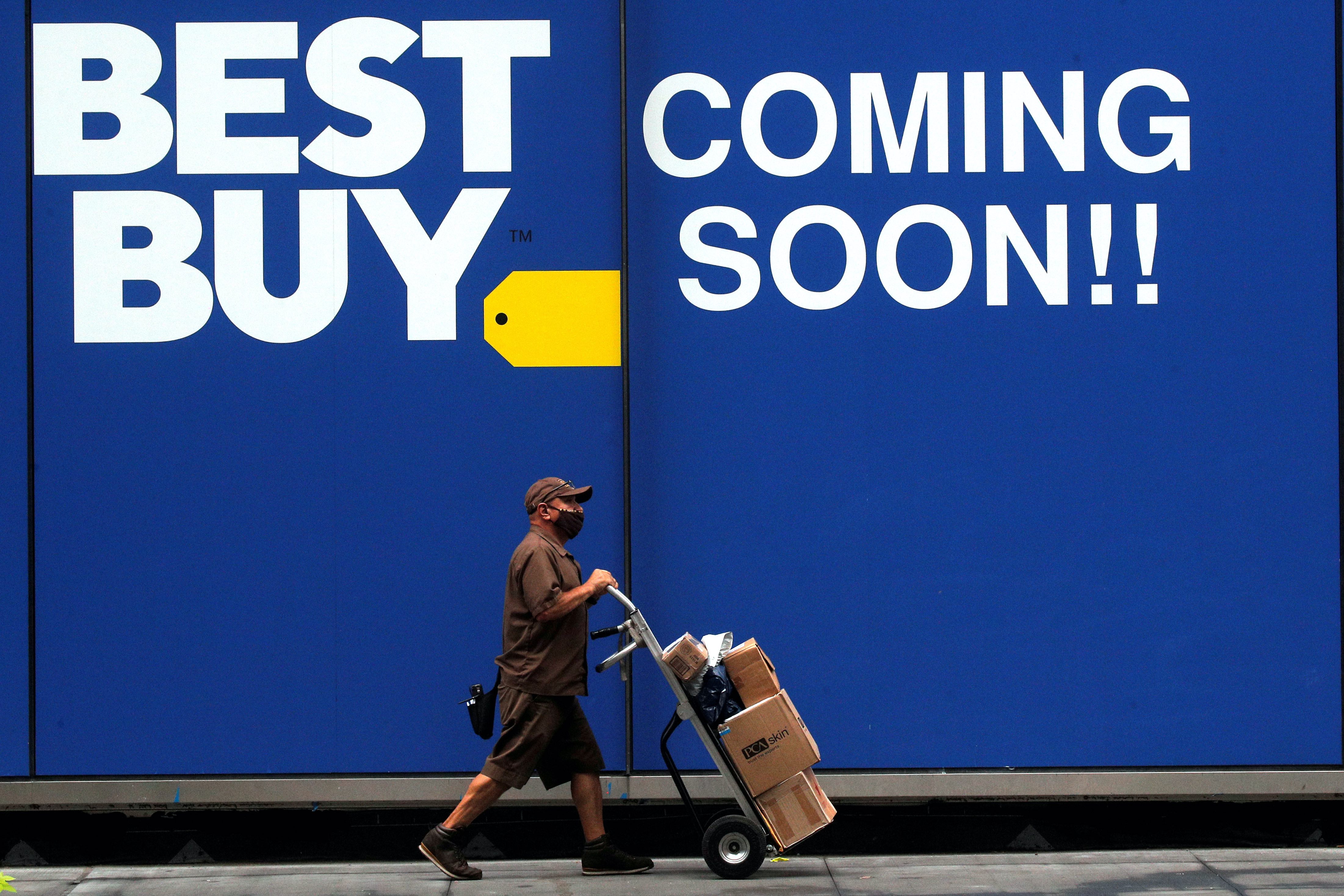 A delivery person passes by a sign for a new Best Buy store in New York City, US [File: Brendan McDermid/Reuters]

But economists have warned of more severe consequences if Congress fails to resolve a political impasse and reinstate federal unemployment benefits.

“The steep decline in federal support for unemployed workers and heightened uncertainty will depress consumer confidence and spending and weigh on the broader economic recovery,” said Lydia Boussour, senior US economist at Oxford Economics.

After enacting a massive financial rescue package in March, congressional Republicans and Democrats have failed to agree on allocating more aid to the unemployed and to struggling states and localities. President Donald Trump signed an executive order offering a stripped-down version of the unemployment benefit.

At least 39 states have accepted or said they would apply for federal grants that let them increase weekly benefits by $300 or $400. But it is unclear how soon that money will actually get to people or how long it will last.

In the meantime, the economy, after a catastrophic fall in the April-June quarter, is likely expanding again. Home and auto sales have been strong. Stock prices have set record highs. 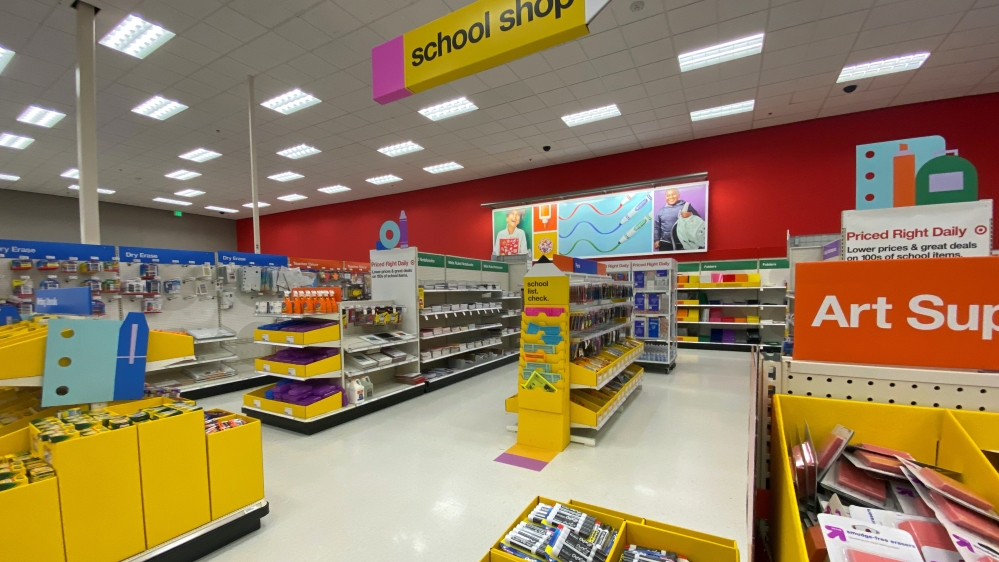 Back to school supplies are shown for sale last month at a Target store during the outbreak of the coronavirus in Encinitas, California, US [File: Mike Blake/Reuters]

But a persistently high level of confirmed viral cases has damaged several industries, especially those involved with travel, tourism and entertainment, and is holding back growth. On Thursday, the government said roughly one million people applied for unemployment benefits last week – a historically high level that has prevailed for weeks.

The Conference Board, a business research group, reported this week that consumer confidence has tumbled to its lowest level since 2014. And in survey results released this week by the National Association for Business Economics, two-thirds of economists who were polled said they thought the economy remains in recession. Nearly half said they did not expect it to return to pre-pandemic levels until mid-2022. 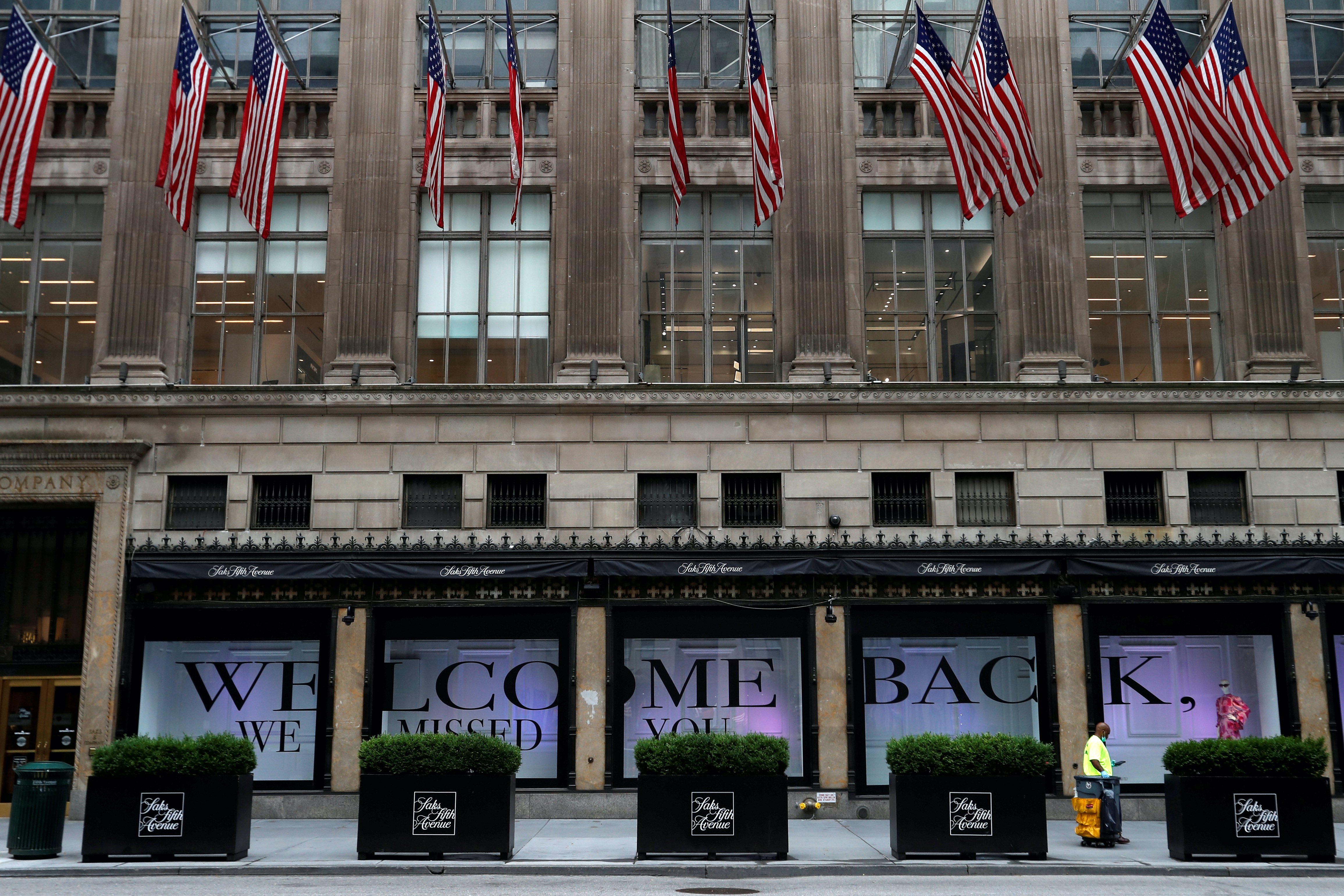 A sign is displayed at Saks 5th Avenue in the Manhattan borough of New York, US [File: Carlo Allegri/Reuters]

On Thursday, the Federal Reserve announced a significant change in how it manages interest rates by saying it plans to keep rates near zero even after inflation has exceeded its 2 percent target level to help support the economy. The change means that borrowing rates for households and businesses – for everything from auto loans and home mortgages to corporate expansion – will likely remain ultra-low for years to come.

Behind the Fed’s thinking is a stubbornly low inflation rate that has long defied its efforts to raise it and a belief that an exceedingly low jobless rate is critically important for the economy and for individual Americans.

Friday’s spending report showed that the Fed’s preferred inflation gauge was up just 1 percent in July compared with a year ago – just half the Fed’s 2 percent target.

The 0.4 percent rise in personal incomes in July followed declines of 1 percent in June and 4.2 percent in May after a 12.2 percent surge in April. Those shifts reflected government support in the form of the unemployment aid and $1,200 stimulus cheques that went to many households. This assistance was part of $3 trillion in relief packages that Congress enacted in response to the tens of millions of jobs that vanished in the recession and the sudden loss of revenue for millions of businesses.

The portion of income made up of wages and salaries part of incomes rose 1.4 percent in July, lower than the May and June gains, while government support payments fell 1.7 percent.