Miss Diamond Ring founder Michelle Demaree has been regularly selling hefty engagement rings despite the COVID-19 pandemic. (Michelle Demaree) A few weeks after much of the U.S. went into a shutdown because of the coronavirus, Peter Webster, cofounder and president of New York jewelry company Roberto Coin, got a call […]

A few weeks after much of the U.S. went into a shutdown because of the coronavirus, Peter Webster, cofounder and president of New York jewelry company Roberto Coin, got a call from a client who was seeking a 25th-anniversary gift for his wife.

In accordance with his client’s budget, Webster sent off a 120-carat diamond necklace, priced at $1.5 million, for consideration.

“That will buy a lot of forgiveness,” Webster said with a laugh a few weeks ago. “We’re seeing quite a few sales in the $50,000-to-$100,000 range. People have this pent-up frustration. They can’t go on their world trip so they will buy jewelry. There’s much more movement than I thought there was going to be.”

Wealthy people are generally still rich despite COVID-19, which has caused economic havoc and led about 41 million Americans to file for unemployment benefits since the pandemic began, according to the U.S. Department of Labor.

Stuck indoors because of the recent stay-at-home orders, the wealthy are shelling out tens of thousands of dollars on pricey baubles that might not be shown off at galas or European getaways anytime soon.

Jewelry retailers have attributed the demand for jewels to a combination of boredom, a need for diversion or a desire for an investment vehicle.

“I think people are seeking things of beauty to equalize the challenging news and information they are digesting daily,” said Los Angeles jewelry designer Loree Rodkin, who has designed pieces for Cher and Elton John. “Beautiful shiny objects take away the darkness that everyone is going through and bring back a sense of normalcy to their lives.”

“After the initial shock of what was going on, when that panic settled down, I started to see this willingness to spend,” said Lisa Nikfarjam, founder of jewelry brand Lisa Nik, which is based in Los Angeles and New York. “My clients found themselves in this unique position of being stuck at home without an outlet. So if they were thinking about a particular piece of jewelry before, now they had an opportunity to make a decision.”

“Not everyone has been financially hurt by this,” said Nikfarjam, who added that her clients were looking for ways to support brands they’d done business with previously. “There has been a giving mentality. I’m pleasantly surprised.”

For auction house Sotheby’s, global online jewelry sales have exceeded expectations. In early May, the company closed a sale of fine jewels that brought in $2 million, surpassing presale estimates, with 91{5667a53774e7bc9e4190cccc01624aae270829869c681dac1da167613dca7d05} of lots sold; the top lot was a Graff ruby and diamond necklace that went for more than $513,000. Since March, Sotheby’s’ 12 online auctions have brought in more than expected, with bidders from more than 50 countries. A New York sale in late April brought in $1.34 million for a 1930s Cartier Tutti Frutti bracelet — that’s about double its original estimate — and is said to be the highest price ever for a jewel in an online-only sale.

“We are as pleased and surprised as everyone else,” said Kendall Reed, head of fine jewels and global online sales for Sotheby’s. “Even though people are stuck in their homes, they are still celebrating special occasions.” Reed said the brisk business being seen by Sotheby’s also could be attributed to the auction house’s global reach.

“There are parts of the world that are a lot more open for business,” Reed said. “And we are also open for selling when a lot of jewelers are not.”

In accordance with Los Angeles County guidelines, jewelry stores have been allowed to reopen. Jay Carlile, store director of the Beverly Hills branch of Italian jewelry house Buccellati, said he had been unable to fulfill client requests because the store and its staff followed the shutdown measures. Buccellati does not have an e-commerce platform.

“It’s a personal business, and it’s hard when we are not able to go into our stores,” Carlile said. Nonetheless, during the shutdown, clients called and asked for pieces and were ready to pick them up when the store started its curbside service.

“Jewelry holds a certain amount of interest when you can’t do much else,” he said. “Everyone needs a distraction, and for our loyal clients, jewelry is it.”

At Gearys, a Beverly Hills jewelry, watch and home boutique, President and Chief Executive Tom Blumenthal has found that customers have been continuing to acquire Rolex watches — the 90-year-old store specializes in them — through the pandemic.

“Even when the store was officially closed, a couple of us were coming in every day to serve our clients over the phone and online,” said Blumenthal, adding that since Gearys fully reopened in early June, it’s been business as usual. “While we were closed, our customers were calling us for Rolex watches, but we were only selling those to clients we knew. Occasions were still happening — birthdays, graduations. People still needed gifts.” Prices for a Rolex watch start at about $6,000 and reach into six figures.

Another thing Blumenthal noticed is an uptick in demand for the store’s prestige homeware, which includes brands such as Baccarat and Christofle. Blumenthal said that shoppers, driven by more at-home entertaining, have been buying glassware and barware since they sealed themselves off at home during the county and state shutdown. Sales have only increased since the store reopened for business, he said.

“Now that people have been spending so much more time at home, they’re reassessing what they have, and thinking, ‘Let’s get a new set of tableware or some new drinking glasses,'” he said. “They’re feeling more comfortable having small groups over for cocktails rather than going out.”

Tim Derdenger, associate professor of marketing and strategy at Carnegie Mellon University’s Tepper School of Business in Pittsburgh, said the pandemic is forcing brands to rethink how they reach customers, including those who aren’t necessarily feeling the pinch.

“Consumers who are that wealthy aren’t feeling too much of an impact,” he said. “And if they are, it’s offset by the theory that they are replacing what they might have spent elsewhere — like on travel — on these higher-end pieces.” He said jewelry companies would have to consider implementing by-appointment-only visits to encourage their clients to feel safe entering a store or arrange showings in a client’s home.

Jewelry retailers maintain that, pandemic notwithstanding, life carries on. Couples are getting engaged. Some are still getting married, and there are special occasions to be celebrated while people have been cloistered at home.

Michelle Demaree, founder of Beverly Hills-based Miss Diamond Ring, sold a $100,000 ring to a client in New York who proposed to his girlfriend in Central Park in the middle of the shutdown. Another client in the Pacific Palisades wanted a six-carat yellow diamond, which was priced at $150,000. Most of Demaree’s sales are for engagement rings, and a few are anniversary upgrades. However, she said there has been “no slowdown” in rings in the $30,000-to-$100,000 range.

“There’s a bit of a carpe-diem mentality,’” she said. “I’ve been seeing more of a drive toward engagements. They just want to continue to celebrate their love and enjoy their lives, quarantine or not.”

As restrictions ease, wealthy collectors are still on the hunt. Just look at London-based Threads Styling, a social commerce platform and personal shopping service that posts luxury looks and items on social media, including one-of-a-kind pieces.

While in quarantine, one client bought a $120,000 Bulgari watch she saw on Snapchat, another an Audemars Piguet Royal Oak priced at $100,000 on Instagram. Sarah Ho, a London-based jewelry designer with a studio in Mayfair, began working with Threads Styling while in lockdown, resulting in the sale of a pair of earrings at $103,000. And what’s particularly noticeable from sales? How many first-timers are buying prestige pieces.

“We’ve seen a real increase in new customers,” said Sophie Hill, founder and chief executive officer of Threads Styling. “And there’s also a real movement to wear fine jewelry and watches every day. Our clients are not putting them in a safe. They’re not saving them for an occasion. They’re wearing them at home.”

Along with social media and video chats, jewel brands and retailers also capitalized on the fascination for sparkling pieces by reaching their clients using traditional approaches.

“I send out wish boxes to my clients containing several pieces,” said Sylva Yepremian, founder of Los Angeles brand Sylva & Cie, where jewelry is typically in the $15,000-to-$35,000 range, with sapphires north of $50,000. “They keep what they like and send back the rest.”

Although Yepremian might have missed out on the trunk shows she usually participates in around Mother’s Day, she said her business is otherwise not as hurt by the downturn or shutdown as she thought.

“The search for self-expression is still relevant,” she said. “We have a captive audience. They need a sense of escapism. They want beauty in their lives. They may not be getting dressed and going out, but putting on a piece of jewelry can make you feel great.”

Wed Jun 17 , 2020
Click here to read the full article. LONDON — Has Highsnobiety cracked the highly divisive online fashion week formula? It might have: In the midst of long-winded industry talks around the future of fashion weeks and the appeal of virtual runways, the streetwear and lifestyle publication decided to take a step […] 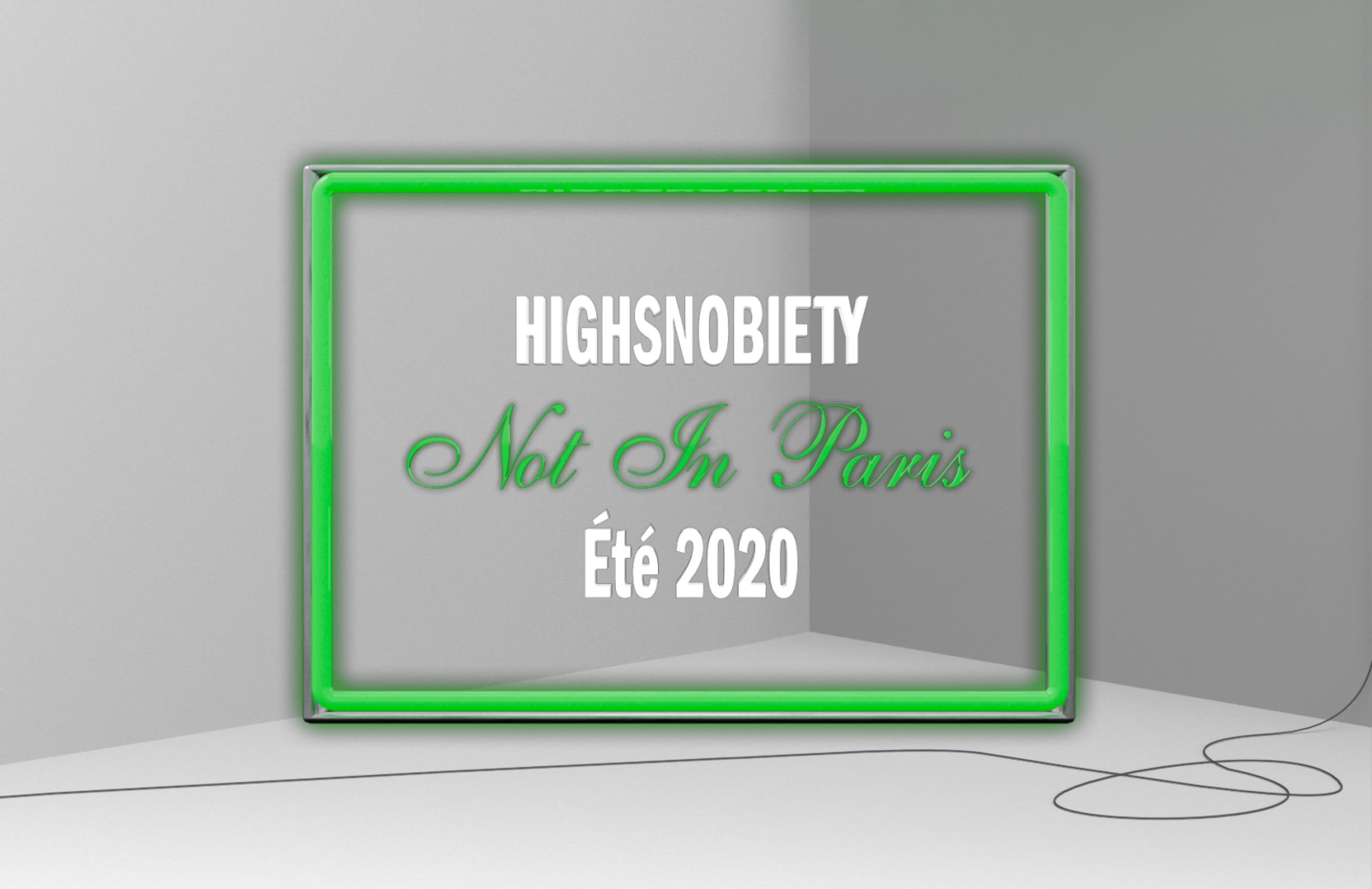