This year’s Juneteenth holiday, which is on Friday, may be the most celebrated in decades.

Amid the backdrop of more than two weeks of nationwide protests against police brutality and racism after the death of George Floyd, major companies and organizations have rushed to recognize Juneteenth as a holiday for their employees or in some fashion. The move has been met as a welcome recognition that Black history is a shared American history but also with a bit of concern that it be more than a short-lived gesture.

Twitter, Nike and the NFL are just some of the biggest names raising the mainstream profile of Juneteenth by giving their employees a paid holiday to recognize the date.

Some find the fact that companies are scrambling to do so somewhat ironic since Juneteenth – a mashup of the month’s name and the date, the 19th – came to be because of a delay in alerting all enslaved people that they were freed by the Emancipation Proclamation issued in September of 1862 and effective Jan. 1, 1863. It wasn’t until June 19, 1865 – over two years after the proclamation took effect – with the arrival of  Major Gen. Gordon Granger in Galveston, Texas, that residents there learned that President Abraham Lincoln had declared “that all persons held as slaves” had been freed and that slave owners needed to comply.

George Floyd protests: A reckoning as Black employees speak out on racism and discrimination in the workplace?

“We recognize that the racial trauma the country is experiencing now is not new, but throughout recent weeks there has been a sense that this time is, and has to be, different,” said Target CEO and chairman Brian Cornell in a post on the corporate web site. “Juneteenth takes on additional significance in this moment.”

Like many other companies, Target has also pledged to improve diversity and has committed funding ($10 million) to organizations focused on improving racial and social justice. “Moving now to recognize it on an annual basis – as a day to celebrate, further educate ourselves or connect with our communities – is one more important action Target can take as a company to help the country live up to the ideal of moving forward in a new way,” Cornell said.

Banks including JPMorgan Chase & Co., U.S. Bank and Fifth Third Bank will be closing early that day in observance of the holiday.

Electronic Arts CEO Andrew Wilson last week announced Friday as a paid day of “company-wide volunteering” with forums and activities employees can participate in. The game publisher is hosting a schedule of events led by its Black employee resource group, involving “12 hours of virtual events including panel discussions, fireside chats, and a Town Hall featuring special guests,” the company said.

Similarly, Amazon and Google employees have been sent memos encouraging them to cancel meetings and “use this day to create space for learning and reflection,” according to Google’s memo, reported by Reuters.

“Please take some time to reflect, learn, and support each other,” Bezos told employees in a memo, a copy of which was given to USA TODAY and was earlier obtained by Recode’s Jason Del Rey.

In email to Amazon employees a short time ago, @JeffBezos stops short of making Juneteenth a company holiday but encourages employees to cancel meetings and take advantage of “online learning opportunities” that Amazon will provide. pic.twitter.com/BIGRqv8Wor

General Motors will have employees on Friday observe 8 minutes and 46 seconds of silence, the amount of time a white Minneapolis police officer pressed his knee on the neck of George Floyd on May 25, leading to Floyd’s death.

‘We are still trying to get free’:: Black Americans continue fight for equality on Juneteenth

“Employers are starting to say… we should be honoring this day and celebrating and educating and training employees about this topic,” said Amber Clayton, director of the Society for Human Resource Management’s Knowledge Center. “So that is why many employers are looking at that saying, ‘Let’s offer this as a day off to do these things.'”

Online entertainment services are on board, too. Spotify is making the date a paid employee holiday and will exclusively feature Black artists in its New Music Friday playlist. Netflix has curated a special Black Lives Matter collection, and Hulu has moved new releases from Friday out of respect. Music site Bandcamp will donate 100{5667a53774e7bc9e4190cccc01624aae270829869c681dac1da167613dca7d05} of its share of sales on Friday to the NAACP.

New York Gov. Andrew Cuomo and Virginia Gov. Ralph Northam are giving state workers the day off, and both Democrats want to make the date a state holiday. Last year, Northam was called to step down after being accused of appearing in a yearbook photo that showed a man donning blackface and another in full Ku Klux Klan regalia.

Juneteenth not taught in school

In school, students are taught about Independence Day and the Emancipation Proclamation – but not everyone learns about Juneteenth in the classroom.

Many learned about Juneteenth by watching the TV show “Black-ish,” says marketing and communications expert Courtney Newell, who is also the author of “Future Proof: The Blueprint for Building a Brand Gen Z & Millennials Love.”

The ABC series devoted its 2017 season premiere to the holiday. “A lot of people were like, ‘I didn’t even know about that until I watched that episode’,” she said. “It’s not taught in schools.”

What to know about Juneteenth:: Holiday marking Emancipation Proclamation takes on extra importance in 2020

The focus on Juneteenth “is a big awakening for a lot of people and it’s inclusive, too,” Newell said. “It’s not just for Black people, it’s really the celebration of Black history, which is also American history.”

After Martin Luther King Day became a federal holiday in 1983, he said, “I noticed that people didn’t celebrate Emancipation Day as much.”

The current – and growing – awareness of the holiday should drive unprecedented observance this year. “I think now white people understand, ‘Damn, even when we freed them, they weren’t free’,” said Ron Busby, president of the U.S. Black Chambers Inc.

Some might argue that, when you look at the demographics of crowds protesting the recent string of incidents involving police brutality, companies could be making statements – and donations of millions of dollars – to simply appease consumers.

The cynicism is rooted in the lack of corporate diversity in corporate boardrooms and across many industries despite the spotlight on diversity in recent years. According to a report from the Harvard Law School Forum on Corporate Governance, minorities held 19.5{5667a53774e7bc9e4190cccc01624aae270829869c681dac1da167613dca7d05} board seats in 2018 among Fortune 100 companies.

The tech industry, especially, has been criticized for a lack of inclusive hiring. Minorities at Google and other major tech companies are also sharply underrepresented in non-technical jobs such as sales and administration, with African Americans faring noticeably worse than Hispanics, a USA TODAY analysis in 2014 revealed. According to the most recent U.S. government data released in 2016, African Americans make up 3{5667a53774e7bc9e4190cccc01624aae270829869c681dac1da167613dca7d05} of employees in the top 75 tech firms in Silicon Valley, while they hold 24{5667a53774e7bc9e4190cccc01624aae270829869c681dac1da167613dca7d05} of the jobs in non-tech firms.

But this feels different, Ivory says.

U.S. Black Chambers president Busby agrees. “When conscientious white people march in protest, then the consciousness of America is shaken.” “I think what is different about this is you have got a cadre of people who are saying, we can do better than that as America and we want change.”

Time will eventually tell whether this “is a moment or a movement,” said Urban League’s Morial. “Making a statement and contributing money is a checking of a box. That is not what is needed here.”

The observation of Juneteenth and some funding “should not be seen as a replacement or as a substitute for the efforts that need to be made to fix the policing system, reform the criminal justice system, or reform economic and education inequities in America,” he said. “That’s what is important. I don’t want anyone to read into it, ‘We did that, we don’t have to do this’.”

Why isn’t Juneteenth a federal holiday?

Juneteenth has been recognized by 47 states and the District of Columbia as either a state holiday or ceremonial holiday, or a day of observance, according to NextGen America. Only Hawaii, North Dakota and South Dakota have yet to take action.

Texas, the birthplace of Juneteenth, made it a state holiday in 1980.

Edward Taylor, digital director in New Hampshire for NextGen America, launched an online petition in May to make Juneteenth a national holiday. Another petition, started last year on Change.org, has more than 278,000 signatures.

The deaths of Floyd, Breonna Taylor and Tony McDade increased interest in NextGen America’s petition, Taylor says. Also driving interest: President Trump’s original plan to hold a political rally on June 19 – Juneteenth – in Tulsa, the site of a massacre of Black residents in 1921 by white men. After backlash, Trump moved the rally to the following day.

NextGen America will conduct an online Town Hall about Juneteenth on Thursday at 4 p.m. PT/7 p.m. ET then, on Friday starting at 3 p.m. PT/6 p.m. ET, The Function, an online event devoted to Black arts, music and culture.

Next week, tune in for NextGen’s Juneteenth Week of Action!

We will be celebrating Black creative expression through artistry, educational panels, & more. This will be a week filled with political action to demand change in the fight for the independence of Black Americans. 🖤📣 pic.twitter.com/W7x9q8ROyz

All of the companies announcing support for Juneteenth “shows me folks are listening,” Taylor said. “It took terrible terrible tragedies for folks to finally listen.”

This article originally appeared on USA TODAY: Off for Juneteenth? Nike, Twitter other corporations observe holiday

Thu Jun 18 , 2020
Many business leaders disapprove of President Donald Trump’s response to the coronavirus outbreak, but fear the consequences of saying so publicly — according to Stephanie Mehta, editor-in-chief of the business publication Fast Company. In a newly released interview, taped on April 27, Mehta said many top executives find it “frustrating” […] 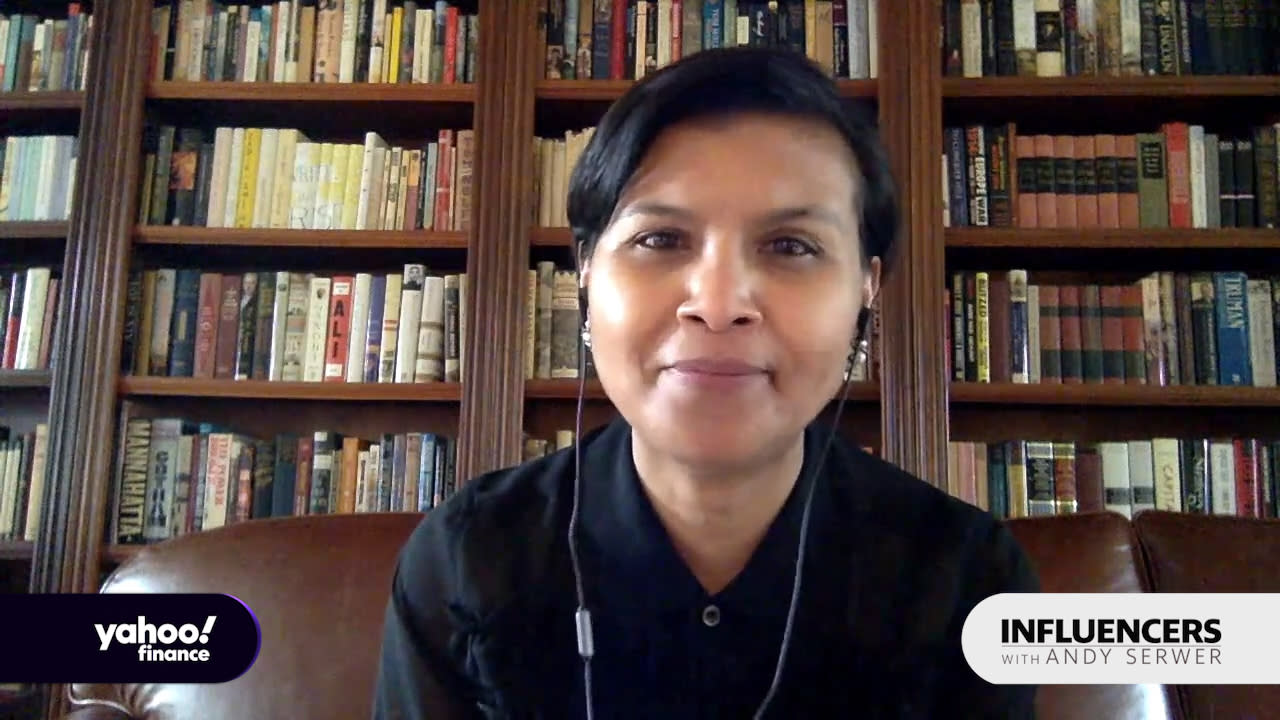