(Bloomberg) — Global leaders including U.S. President Donald Trump will participate in a video conference on aid for Lebanon later Sunday as protests against the ruling class gather strength in the wake of the catastrophic explosion that destroyed parts of the capital Beirut.

The talks are due to start at 2 p.m. in Paris. They’ll be hosted by the United Nations and French President Emmanuel Macron, who promised on a visit to Lebanon Thursday that any aid will go direct to the people and not via a state apparatus that’s lost trust amid growing corruption and a financial meltdown.

The tragedy, caused by explosive materials stored for years at the city’s port, also resulted in billions of dollars of damage, according to authorities, with a report to be presented to the Paris conference suggesting that at least 200,000 housing units were damaged.

Participants in the conference will include the U.K., Germany, the European Union and the World Bank, as well as Gulf states Kuwait, the United Arab Emirates, Saudi Arabia and Qatar, a French official told reporters Saturday.

No estimate was given for the size of the aid package and the official said there would be “no blank check to the Lebanese government,” with pledges channeled through the EU, World Bank and UN to ensure that local NGOs and the Lebanese Red Cross gets funds.

Immediate needs include about $85 million toward medical relief. Money will also be directed at saving crumbling buildings and reconstructing damaged schools and hospitals.

Lebanon’s minister of information, Manal Abdel Samad, submitted her resignation “in response to the public calls for change,” she said in a televised press conference on Sunday. The country’s foreign minister stood down days before the explosion, warning that it risked becoming “a failed state.”

Mideast states, European nations and the U.S. have already sent mobile clinics, food and medicine to the country. European Council President Charles Michel was in Beirut on Saturday and promised support.

The chief of the Arab League, Ahmed Aboul Gheit, pledged to mobilize regional efforts to provide assistance, while Turkey’s Vice President Fuat Oktay said during a visit that his country will help rebuild the port, according to the state-run Anadolu Agency.

Lebanon, which is almost entirely reliant on imports of fuel, food and raw materials, may use Turkey’s Mediterranean port of Mersin until quay-sides in Beirut are restored. Ankara is also prepared to reconstruct nearby buildings and send medical assistance and food aid, the agency said.

Read more: A Shattered Beirut Leaves Lebanese Asking If They Have a Future

Promises of relief came as violent protests broke out against a political class blamed by many for decades of graft and mismanagement.

Demonstrators briefly occupied several government buildings and set up nooses in downtown Beirut on Saturday for politicians they say allowed 2,750 tonnes of ammonium nitrate, unloaded from a ship in 2014, to be kept at the port despite repeated safety warnings. Security forces responded by deploying tear gas.

Prime Minister Hassan Diab has promised to propose an early election, though that may not be enough to quell fury over an explosion whose sheer scale drove home to many the extent of the state’s failings.

Even before the blast, Lebanon was reeling under its worst financial meltdown in decades.

The currency has collapsed, driving inflation into double digits and wiping out life savings. The government is bankrupt and in talks with the International Monetary Fund for a $10 billion loan program, yet unable to agree on the reforms needed to clinch that support. The state provides only a few hours of electricity a day and garbage is left uncollected in the streets.

A combination of closures linked to the banking crisis and the coronavirus pandemic has also left businesses struggling to stay afloat. The economy was already expected to shrink dramatically.

(Updates throughout with details of participants, protests)

bloomberg.com” data-reactid=”43″>For more articles like this, please visit us at bloomberg.com

Mon Aug 24 , 2020
(Bloomberg) — The most successful way to be a gold producer may be to not operate any mines. At least, that’s the business model of DRDGold Ltd., the best-performing stock on the MSCI ACWI Select Gold Miners Investable Market Index this year. The company, which specializes in recovering gold from […] 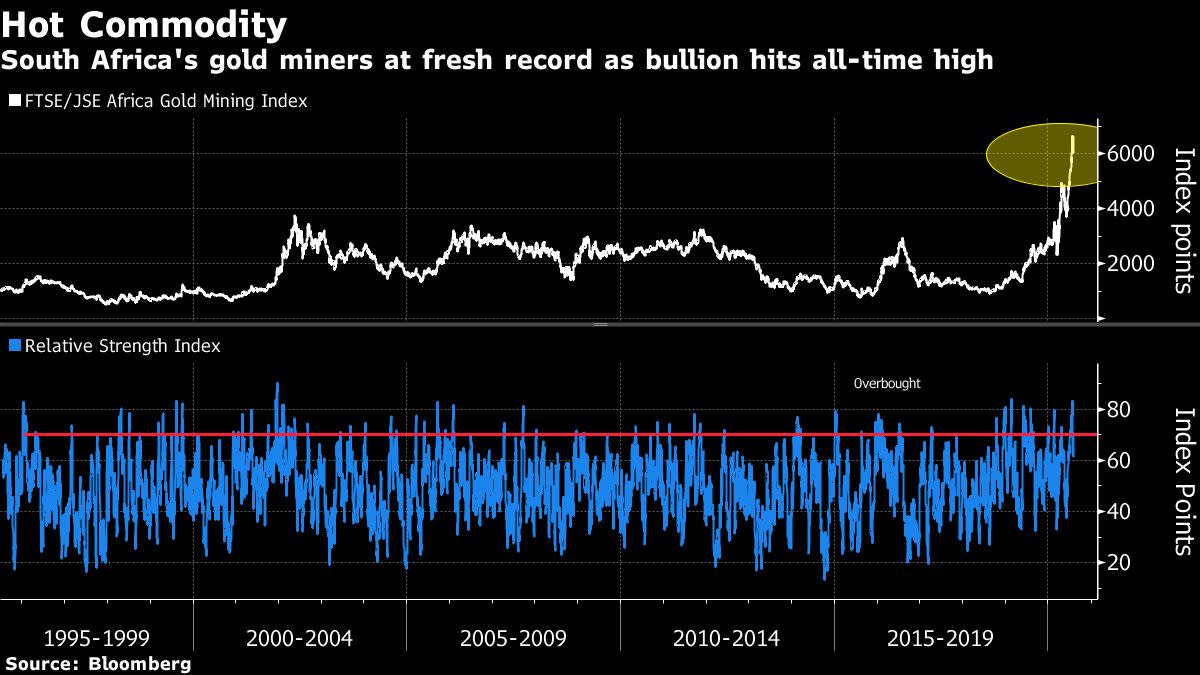